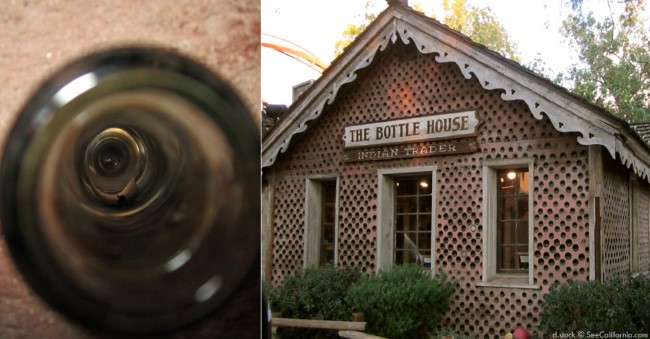 Bottlehouse today is a popular name for restaurants in Seattle and other cities. It usually refers to wine and beer being served. But the original bottle house comes from real homes being built out of bottles. The use of empty vessels in construction dates back to ancient Rome. Embedding materials in concrete lightened the load of upper levels of structures.

While some sources say the first bottle house was built in 1902, it more widely believed that bottle houses did exist during the California gold rush. Those examples are mostly gone but there are some bottle houses remaining that public can see such as the Tom Kelly Bottle House in Rhyolite, NV, built around 1905. 51,000 beer bottles (mostly Busch beer) were masoned with adobe. The bottles came from 50 bars in this Gold Rush town which became a ghost town by 1920.

In 1925, Paramount Pictures discovered the Bottle House and had it restored for use in a movie. It then became a museum, but tourism was slow, causing it to close. From 1936-1954, Lewis Murphy took care of the house and hosted tourists. From 1954-1969, Tommy Thompson occupied the house. He tried to make repairs to the house with concrete which, when mixed with the desert heat, caused many bottles to crack (Kelly had used adobe mud).

Knott's Berry Farm Bottle House in Ghost Town was made from 3,082 wine and whiskey bottles.

Although building materials were often scarce in the old west, liquor bottles were always plentiful, and an enterprising miner would sometimes build himself a house of bottles and mud. Knott's Berry Farm built theirs in 1944. It is similar to a bottle house built in Rhyolite, Nevada. If you ever build yourself a bottle house, be sure to turn all the bottles neck inward, as they are at Knotts. Otherwise, on a windy day, you're going to hear very spooky sound effects.

Used as Indian Trader store, the bottle house is a remake of the Rhyolite Bottle House replicated from photos taken by Walter Knott in the early 1950s.

Simi Valley Bottle Village Built by the self taught senior citizen Tressa Grandma Prisbrey, this village which includes bottle shrines, wishing wells, walkways, random constructions, plus 15 life size structures are all made from found objects placed in mortar. The name "Bottle Village" comes from the structures themselves - made of tens of thousands of bottles unearthed via daily visits to the dump. You could call Prisbey the Sarah Winchester of bottles.

Washington Court Bottle House in Ohio was made with 9,963 bottles of all sizes and colors. In Alexandria, Louisiana a bottle house gift shop was constructed by Drew Bridges who used bottles from his drugstore. There are about 3,000 bottles used as masonry units with railroad ties used as the framing structure.

The Kaleva Bottle House in Kaleva, Michigan, was built by John J. Makinen, Sr.(1871-1942) using over 60,000 bottles laid on their sides with the bottoms toward the exterior. The bottles were mostly from his company, The Northwestern Bottling Works. The house was completed in 1941, but he died before he could move in. The building was purchased by the Kaleva Historical Museum in 1981 and is listed on the National Register of Historical Places.

Boston Hills Pet Memorial Park in Boston, Massachusetts, has a bottle wall from 1942.

Wimberley Bottle House in Wimberley, Texas, was constructed using over 9,000 soda bottles. It was modeled after Knott's Berry Farm bottlehouse in California and was built in the early 1960s as part of a pioneer town.