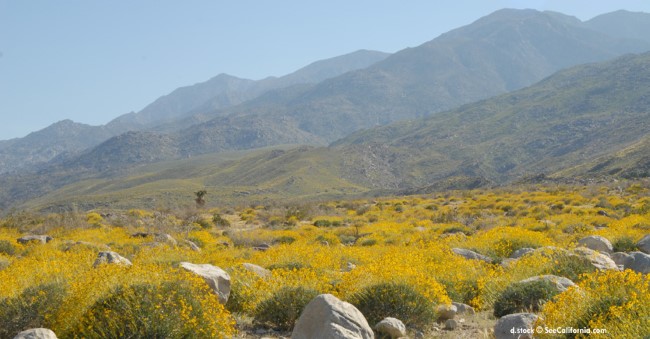 The highest peak in the contiguous U.S. is Mount Whitney at 14,505 feet, located within the Sierra Nevada in California. California mountain regions were formed millions of years ago during major geologic movements, though the earth continues to move even inches per day in some parts of California as new mountains slowly form.

For the real mountain action look to Lake Tahoe and Mammoth Mountain for ski opportunities not to be missed. In addition, mountain biking, cross-country skiing, hiking and camping are all extremely popular activities in California.

Other mountain ranges include the California coastal range, San Bernardino mountains in Los Angeles, Cascade mountains of Northern California, and many more.

Several of California's mountain ranges are known for their excellent skiing, but many of the mountains also include summer time water sports such as lake fishing, waterskiing, and boating.

National parks in California in the mountains are some of the most unforgettable, must-see places in the entire state. Yosemite National Park, Sequoia National Park and Kings Canyon, plus Lassen National Park, all provide wonderful vacations you will never forget. Basin and Range Mono Lake To the east of the Sierra is the Basin and Range geological province, which extends into Nevada.

Here are the primary mountain ranges in California:

Basin and Range is a series of mountains and valleys that include the oldest lake in North America, Mono Lake. The deepest valley in North America is Owens Valley, is more than 10,000 feet deep measured from the mountain peak at Mt. Whitney. At the base of the Sierra Nevada mountains are the desert dry lake beds where the largest borax mine can be found in the Mojave Desert. The White Mountains of the basin & range, contain the oldest living thing in the world, the bristlecone pine.

Cascade Range - The Cascade Range is a mountainous region stretching from British Columbia in Canada down to the northern part of California...read more>

Coast Ranges - To the west of the Central Valley lies the Coast Ranges, including the Diablo Range, just east of San Francisco, and the Santa Cruz Mountains, to the south of San Francisco. These mountains are noted for their coast redwoods, which live within the range of the coastal fog, the tallest trees on Earth. You'll also find the Big Sur Coast is part of the Coastal Range, spanning Carmel to a few miles north of San Simeon, California.

Klamath Mountains The Klamath Mountains are a mountain range in northwest California and southwest Oregon, the highest peak being Thompson Peak, 9,002 ft., in Trinity County, California. They have a very varied geology, with substantial areas of serpentine and marble, and a climate summers with limited rainfall. As a consequence of the geology, they have a unique flora.

Sierra Nevada - In the east of the state lies the Sierra Nevada, which runs north–south for 400 miles. The highest peak in the contiguous United States, Mount Whitney at 14,505 feet, lies within the Sierra Nevada. One of the most prominent and most visited attractions in the Sierra Nevada is Yosemite National Park with unique Half Dome, and the nation's tallest waterfalls. Read more...>

Tranverse Ranges - Southern California is separated from the rest of the state by the east-west trending Transverse Ranges, including the Tehachapi, which separate the Central Valley from the Mojave Desert. Within this range is Santa Ynez Mountains .......read more>