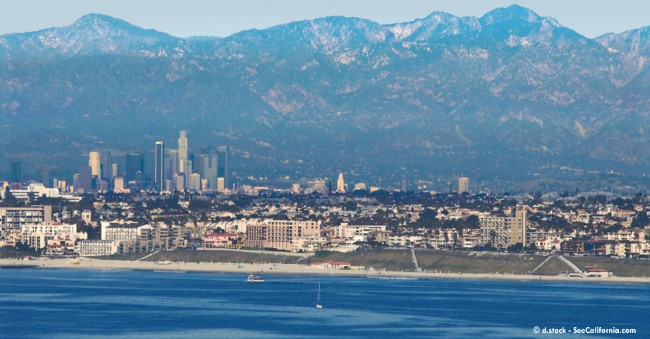 Tranverse Ranges are mountains in Southern California (and a portion of Central Coast) with east-west trending.

From Point Mugu north of Santa Monica to Griffith Park east of this city, The Santa Monica Mountains are a part of only east-west belt of mountains in North America. Comprised of rocks nearly 200 million years old, the mountains were formed in many series of ruptures between the Pacific Plate and the North American Plate. The tallest peaks are close to 3100' elevation.

46 miles in length and around 10 miles wide, Santa Monica Mountains are the only mountain range in the world that divides a city into. Landmarks such as the Santa Monica pier and the Hollywood sign are located within this mountain range.

Operated under the auspices of the US Parks as a National Recreation Area, access to the mountains for visitors seeking recreation include these places: Recognized as the largest urban national park in the USA, urban dwellers do not feel so cramped when they enter the Santa Monica Mountains areas to enjoy bicycling, hiking, horseback and even some camping. A variety of animals ranging from mountain lions to endangered bird species dwell in this urban oasis that is surrounded by 17 million people. Sightings of mountain lions are common in neighborhoods located near the mountains and an occasional dog may be killed in one of the encounters. In fact, it is almost ironic that Los Angeles Zoo, where local media created a feeding frenzy over a news story about an alligator "Reggie", who was caught and placed into the zoo, only to escape from his pin. Found wandering the zoo, if Reggie had gotten loose, he may have made into the sparse forests of sycamore trees and pines that populate this range. There is so much to do in this urban wonderland that guests couldn't possibly see and do it all. Over 1,200 organized activities are offered annually, including music concerts, silent movie screenings, trail tours and more. Paramount Ranch, where Paramount Pictures' filmed at the old Rancho Las Virgenes movie ranch, Rancho Sierra Vista/Satwiwa, a sacred Chumash Native American Indian site, Castro Crest and Circle X Ranch are but a few of the parks attractions. The main directive from the National Parks is "stay on the trails." You can't avoid snakes, but they claim the poison oak and ticks that abound are less pervasive when you stay on the paths provided. nps.gov