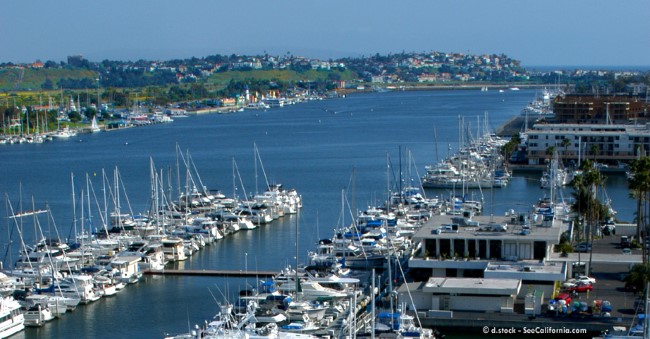 Marina del Rey is part of the City of Los Angeles. It is an unincorporated community not far from Los Angeles International Airport, and is known for its marina, as the name indicates.

Surrounded by incorporated cities such as Santa Monica to the north and Marina del Rey, Calif., the largest man-made marina in the world is the last marina you'll find in Los Angeles County between Redondo Beach and Oxnard. That is a 50+ mile distance--quite a stretch considering over 12 million people live in and around L.A.!

Marina del Rey's marina is the top attraction and thanks to its scenic design and size, there are more restaurants packed into one square mile than any other city except for New York. Marina del Rey has always enjoyed its waterfront dining, and actually is home to the 2nd Cheesecake Factory restaurant that opened in 1983.

With many great restaurants, high rise condominiums overlooking the bay and Pacific Ocean, and an urban, cosmopolitan flavor, Marina del Rey is popular for corporate meetings. The Five Diamond Ritz-Carlton Marina del Rey is located along the waterfront and features its own dock for luxury outings, plus waterfront dining at Jer-ne. The hotel is within walking distance of dining and a small beach, Mother's Beach next to the Marriott hotel.

The massive size of the marina would be difficult to construct today, nearly 50 years after its completion and formal dedication on April 10, 1965. It took over 75 years for Marina del Rey to be funded and built, with one investor going bankrupt in the process. Though Marina del Rey thrives as a scenic and beach-close community tied to marine activities, the blue water inlet of the Pacific Ocean was earmarked potentially to become a port. Instead the port was built to the south in San Pedro, and Marina del Rey remains a pleasure craft marina to this day.

An annual nautical parade is held at Christmas drawing thousands of spectators to watch the lighted boats glide through the harbor with the colored lights flashing in the shapes of identifiable objects, and many include live bands performing during the parade. The grand finale is a fireworks show over the harbor. It is really quite a spectacle worth seeing, though it is short lived.

In the past: M.C. Wicks formed Port Ballona Development Company in 1887 under the auspices of the Santa Fe Railroad. His goal was to transform Playa del Rey estuary and inlet into a major commercial harbor to serve the Los Angeles area. He raised $300,00 for construction work which extended over a three year period. Wicks went bankrupt and the area was taken over by duck hunters.