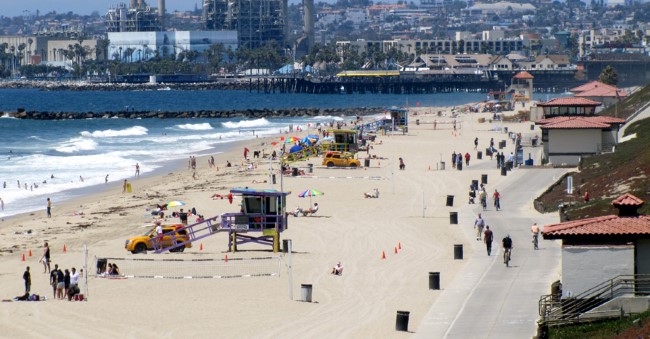 REDONDO BEACH, CA--Known for its beautiful beach, spectacular pier, and many water sports, this South Bay - L.A. County city is filled with health nuts. People at the beach like to ride bikes, jog, and roller blade whenever they get a chance.

One such example includes the sales team across the street at Crowne Plaza resort. When conference planners come to check out the "digs" they are taken out on bicycle rides to survey the landscape and discover that work can be healthy and fun.

Whether you skate, blade, bike, or even glide in your favorite baby buggy as mommy or daddy thrills you with an exciting ride at the beach, rust never sleeps. Redondo Beach, the city that "wheelie" moves, has more wheels per capita than any U.S. city--and they really know how to use them!

We recently visited the Redondo Beach Lobster Festival at Seaside Lagoon and were amazed by the volumes of people moving along the street courtesy of wheels attached to their feet or propelled by them. The Los Angeles County beach destination located in the South Bay is accustomed to a fast pace, no doubt.

Commercial airline pilots zoom into town (via Los Angeles International Airport) flying jumbo jets that move 500 mph, brainy scientists from Northrop Grumman invent methods to propel vehicles faster & further into space, and well-grounded residents & visitors who want to get between point A & B the quickest way all have discovered that wheels are the way to go.

Getting to Redondo Beach: For the most part you'll be limited to traditional methods of transportation coming into the city. You can take taxis, rent cars, or ride buses to get to the beach, strewn with a handful of affordable and luxury hotels where most guests stay. Redondo Beach is approx. 15 minutes from LAX.

What to do: Rent a bicycle or roller blades along the beach path at concessions that are open most every day. After you've checked out the city and gotten your ball bearings, you can decide what you'd like to pursue. There's surfing, swimming in the Pacific Ocean, and one of our favorites, the boat tours. Tours include fishing trips, whale watching cruises, and a cute semi-submersible boat where you can ride around the bay and look at the sea-life through big windows.

March - Annual Festival of the Kite is sponsored by the Redondo Pier Association. Nearly 40 years of high-flying times.

September - The annual Redondo Beach Lobster Festival is a festive weekend of entertainment and food at Rainbow Lagoon. With entertainment ranging from extreme water ski shows in the lagoon to top name concert acts, it's an affordable family fun event.

Where to eat: In addition to being the Wheel City, Redondo Beach boasts the most ocean and bay view restaurants on the Southern California coast. Cuisine runs the spectrum with unique ethnic themed cafes & diners, but a specialty is the fish market at King Harbor where you can select fresh catch and have it prepared on the spot.

For a vacation that will really move you, make Redondo Beach your home base for trips to Universal Studios Hollywood, Disneyland, and nearby Muscle Beach in Venice--a place you can get to fast with your set of wheels. More information is available at: redondochamber.org