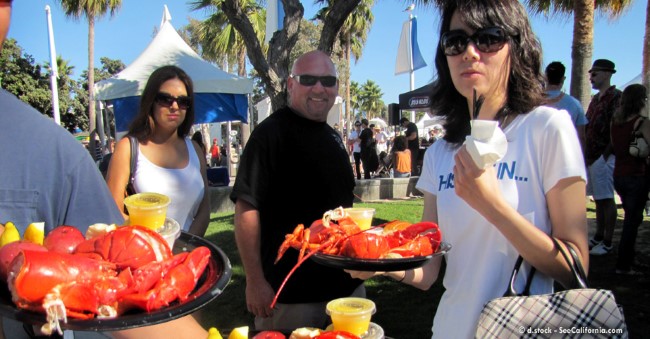 In addition to fresh, steamed lobster, visitors to the festival that spans an entire weekend can eat at a variety of booths serving cobblers, corn, BBQ, Chinese and just about anything else. You won't go hungry if you bring your money.

An admission fee allows you to enter the festival without purchasing lobster meals so you can enjoy the live music, shows, entertainment, vendors, and seaside location overlooking the Redondo Beach Harbor.

In past events we've see swimsuit fashion shoes, extreme water sports shows in the lagoon, and lots of great bands.

One of the fun events in the past has been a mechanical bull ride featured under a big shaded tent, so guests could try their hand and ridin' em, complete with cowboy hat. Each year you never know what new surprises and special attractions are in store!

Most people wear lobster hats, however, at an event that usually has a lobster souvenir vendor selling lobster forks, lobster hats, lobster shirts, and all the lobster items you could possibly want--even lobster stuffed animals for the kids.