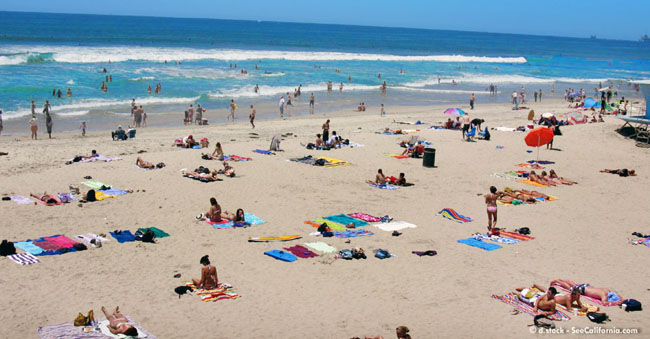 Now that California has emerged from some of the most restrictive COVID-related closures in the U.S., hundreds of the Golden State's beloved beaches — comprising 1,000 miles of West Coast shoreline — are more welcoming than ever. Sand, sun and the glistening Blue Pacific soothe your soul, renew your spirit and bring promise of great days ahead!

Returning in 2022 to its full glory is possibly the largest beach sporting event in California, the US Open of Surfing in Huntington Beach. Rivaling this event is the return of the International Surf Festival in Hermosa Beach, Manhattan Beach, Redondo Beach & Torrance Beach, where hundreds of thousands of people attend and/or compete in competitions such as surfing, bodyboarding, paddleboarding, volleyball and sailing, to name a few. California Beaches play host to a variety of festivals such as:

What's the best beach for a vacation? The one that offers beach hotels is a good start, in my opinion.  Don't compare California's beaches to Florida or other beach hot spots around the nation and globe because these beaches are different. The Pacific Ocean  waters are somewhat cooler, and tourists complain about that. But what they can't argue with are fantastic expanses of clean sand (thanks to laws that halt high-rise development, plastic bags and prohibit smoking on beaches!)

While California's beaches are sparsely populated in the winter months (November-February,) in peak season of July-August parking can fill to capacity and crowds await on holidays and hot summer days.

Coldest beaches: Mendocino, Del Norte and  Humboldt Counties. Not only are air temperatures 10 to 20 degrees cooler than San Diego, the water temperatures are similarly cooler by 10 degrees or more!

There are 58 counties in California but only 15 have Pacific Ocean beaches. When you put that in perspective, it comes to around 1,000 miles of shoreline to explore. Most of it is accessible to the  public though the terrain can vary, as well as the beach make-up such as sand versus rocks. For students working on school projects, here is a list of California Beach Counties:

Los Angeles
These coveted beaches are among the most attended in California. Los Angeles has the most famous Oceanfront places, thanks to Hollywood filming. Bay Watch and countless movies and TV shows have been filmed on these shores that include Malibu, Redondo Beach, Santa Monica, Venice Beach, Hermosa Beach, Manhattan Beach and Long Beach, to name a few.

Monterey
Famous for romance, Monterey County beaches such as Carmel by the Sea, Monterey, Pacific Grove and Pebble Beach contain the stuff dreams are made of. Foggy nights make way for sunny days  where you can swim, kayak, surf, golf and sunbathe to your hear's content.

Orange County
40 some miles of coastal paradise in California's premier destination are easy to access and hard to leave. These are the coolest, trend-setting spots in the West, used as subject matter for fictional shows in places such as Newport Beach (The OC), and Laguna Beach. Easy going, lots of sand and beach paths for bicycling and jogging in Huntington Beach (a surfing mecca) make OC beaches the number one choice for many travelers and three million residents of Orange County.

San Diego
For those who love Mexico's coastal beaches, San Diego's got your number! Pacific Beach, Ocean Beach, Mission Beach, Encinitas, Oceanside and Carlsbad are a few names recognized in the warmest, southernmost beaches of the USA. One beach of note is Blackie's, a surfer beach famous for nude sunbathing lore. Another beach with famed surfing lore is Swami's in Encinitas.

California Underwater Parks Species You May See at