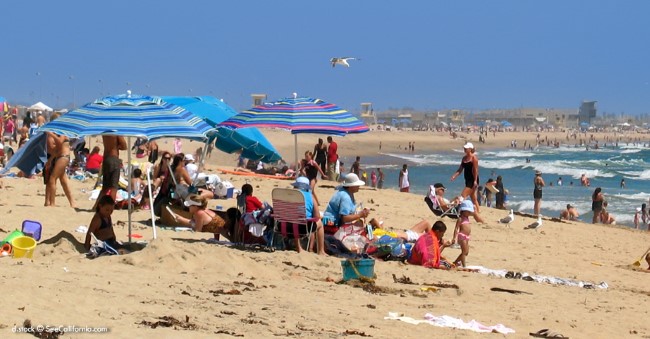 There are 12 geographic regions that comprise California. Though not one region is called "beaches", there are 6 regions that include beaches in their assets and attractions.

The least populated region is the North Coast where the redwoods meet the sea. Its pristine coast is rugged, but includes cooler temperatures and up to 50 inches of rain annually. While the beaches of this area are spectacular in counties: Del Norte, Humboldt, Mendocino and Sonoma, other attractions such as the magnificent redwood forests are primarily what drives tourist to the state's northernmost coastal reaches.

Central Coast: beaches are where the wine meets the sea. From Monterey, Carmel, Pacific Grove and Pebble Beach to Pismo Beach and Santa Barbara, these beaches are sought out as the midway coastal point between Los Angeles area and Bay Area.

Los Angeles County beaches get the most visitors and are frequently seen in films, TV shows and other productions. Santa Monica, South Bay, Malibu and Marina del Rey are some of the names you may hear when referring to them. Dockweiler State Beach is one of the most visited state beaches or parks in the 270+ parks system.

San Diego County: beaches are the most popular escapes for Californians, especially. These southernmost beaches border Mexico at Tijuana, and include surfing destinations, dog beaches, Coronado (ranked as the best beach in America,) and they embody the California beach lifestyle the world clamors to experience at least once.