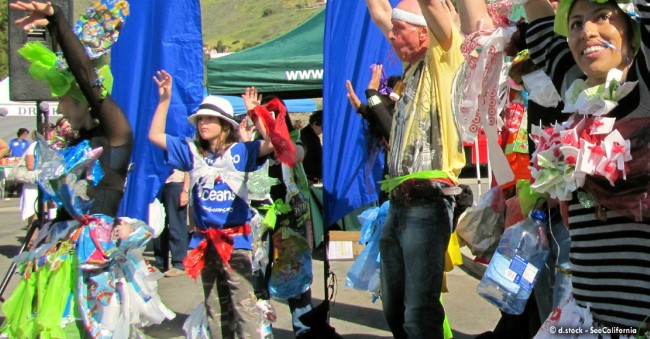 A dance performance group, Kids4Oceans, performs creative dances--wearing trash. The popular musical tunes are set to messages about about pollution and human impacts through trash.

Plastic trash zombies is a dance group formed in 2009 to raise awareness of the ocean's dire situation.

Plastic Trash Zombies were formed in August 2009 to raise public awareness about plastic pollution in the oceans. By dancing with ridiculous plastic trash costumes, the zombies draw attention to the fact that we have so much plastic waste in our daily life. The zombies also help educating public about the ocean pollution. At least 80 percent of the plastic in the ocean originated from the land, and over 100,000 of marine animals are killed by ingesting or being trapped by plastic every year. Toxins in plastic are entering the food chain and causing illnesses.