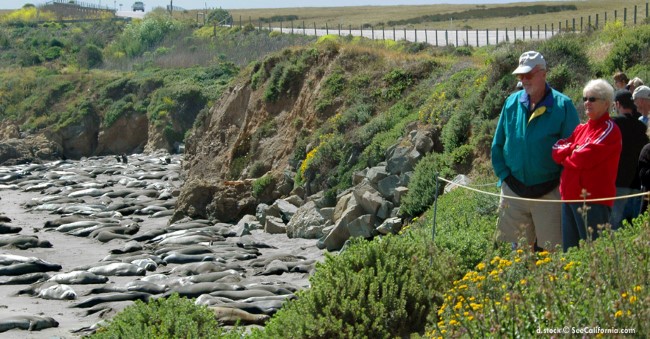 If you dive, snorkel, paddle or boat in one of California's new underwater parks, here are 10 species you might find:
La Jolla Cove: Leopard shark

La Jolla is one of California's best places to see leopard sharks, and in the summer, hundreds of these harmless fish may be present. Leopard sharks have the same shape and profile as other sharks but have distinctive dark spots on a grey or brown body. They range from 2 to 6 feet in size and frequent warm, shallow areas in rocky or sandy bottom. At La Jolla, you may find them in as little as knee-deep water.
Laguna Beach: Garibaldi

California's marine state fish, the Garibaldi, looks like a giant goldfish. They are so bright that on a clear-water day you can see them in the kelp forest as you stand on the Laguna bluffs and look down on the water. You don't even have to get wet! These social fish freely interact with snorkelers and divers and will comically attempt to chase away much larger animals—including people—from the intricate breeding nests they build for breeding season.
Italian Gardens, Catalina Island: Black giant sea bass

Black sea bass are believed to live over 100 years and reach lengths of 7 1/2 feet. In 1910, conservationist Charles F. Holder said 800-pound individuals were being taken off Catalina, and he pressed for their protection. Historically, the giant sea bass was a popular commercial and recreationally fished species, but with commercial fishing of the species banned in 1982 and sportfishing banned in 1983, they appear to be making a slow comeback.
Point Vicente/Palos Verdes: California sheephead

California sheephead favor rocky reef habitat and kelp forests, and Palos Verdes' coastline has great quantities of this habitat. The male is black with a white jaw and a broad red band that sometimes spans the body. The female is pink with a distinctive white chin. All sheepheads are born as females and eventually change to males at 18 inches.
Anacapa Island: Bat ray

Bat rays are diamond-shaped members of the eagle ray family with long tails. They are graceful swimmers that frequent sandy areas near kelp and bury themselves in sand in order to surprise prey. Bat rays may reach almost 6 feet in length and weigh 200 pounds or more.
Piedras Blancas/ Ano Nuevo: Elephant seals

The northern elephant seal is the world's largest seal, growing over 20 feet long and up to 8,800 pounds. But it's their inflatable, trunk-like snout that gives them their name. Southern elephant seals can dive over 4,921 feet deep and remain submerged for up to two hours. These long-distance travelers migrate over 10,000 miles at a time, returning to California beaches twice a year.
Big Sur and Point Reyes: Gray whales

Each year, more than 20,000 gray whales migrate south from feeding grounds in Alaska to calving areas in the lagoons of Baja, Mexico. Frequently visible along the California coast, these giant marine mammals are best seen from highway turnouts in Big Sur and the Point Reyes Lighthouse.
Farallons: Tufted puffins

These strange and vibrant birds are black, pigeon-sized marine birds with massive heads; heavy, bright orange or red beaks and feet; and yellow plumes, called tufts, behind the eyes. They spend most of their lives far offshore diving to feed on fish, but may be seen with some regularity at the Farallon Islands off San Francisco from April to September.
Monterey Peninsula: Sea otters

Sea otters are ocean-going members of the weasel family and the smallest marine mammals. Rather than insulating blubber, these creatures have extremely dense hair and consume great quantities of shellfish to maintain body warmth. Sea otters nearly went extinct due to harvest for their fur, and the current population numbers about 2,800. They are often visible from shore, sleeping wrapped in fronds of kelp or foraging for food.
Monterey Bay: Blue whales

Blue whales are the largest animals ever known to have lived on Earth. These magnificent marine mammals rule the oceans at up to 100 feet long and upwards of 200 tons. Their tongues alone can weigh as much as an elephant; their hearts, as much as an automobile.