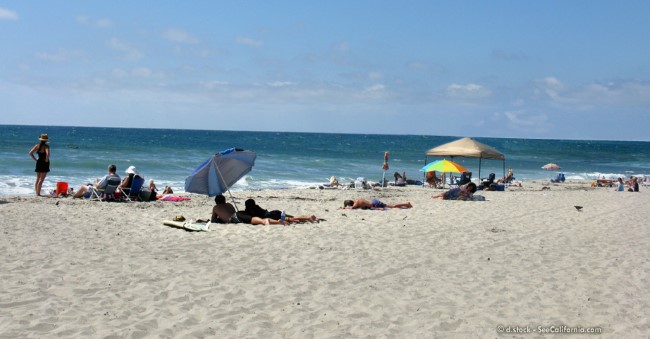 Carlsbad Boulevard
Highway S21 & Tamarack
Carlsbad, CA
According to findings by UC Irvine public health professor Oladele Ogunseitan and others published in the December issue of the Journal of Environmental Psychology, the hotter weather, rising seas and shrinking sands caused by climate change could cut into the very real mental health benefits of coastal visits.

It's 67 degrees and sunny on a November afternoon at Crystal Cove State Park. Waves crash gently into transparent tide pools and fan out over empty golden sands.

We underestimate the contribution of state beaches like this. It sounds like just fun, but it's not, says Ogunseitan, chair of UCI's Department of Population Health & Disease Prevention. People go through processes here that help them focus better and have less mental stress. They become more productive.

One way we can prevent the huge burden of mental health costs is to take care of these places. With climate change, these impacts will get worse and worse otherwise.

To the researchers' surprise, they found that Southern California's breezy winter days and low tides were more restorative for coastal visitors than summer scorchers and booming surf.

Feeling too warm and having to fight for a spot in the sun on narrower beaches work against a feeling of well-being. Even a foot less space on a crowded day can make a difference.

The study is the first known to compare people's perceptions of coastal conditions and feeling of being refreshed to official data on tides, air and water quality, and temperatures. Nearly 1,200 individuals of all ages answered questions in all types of weather over the course of a year at three state beaches in Orange County.

Visitors perceived greater restorativeness at beaches when ambient temperatures were at or below mean monthly temperatures and during low tides, according to Aaron Hipp, lead author on the paper and a former graduate student of Ogunseitan's who is now an assistant professor of public health at Washington University in St. Louis.

Pollution is also a factor. Beachgoers were three times more likely to enjoy themselves and feel less stressed if they did not experience air pollution " often seen as a brown haze on the California horizon.

They were nearly twice as likely to feel restored if they did not perceive water quality problems.

People have high expectations of what summer should be, and if things drop below that, it takes the wind out of them, Ogunseitan says. They don't have a feeling of being away.

Raised in the Nigerian city of Lagos on the Atlantic Ocean, he says the findings do not bode well for coastal visitors worldwide if the effects of climate change continue or even worsen in coming decades.

When the research team culled beachgoer responses on days when temperatures were 3 to 8 degrees warmer (Fahrenheit) than historical averages " the predicted temperature rise along the California coast over the next half century " the conclusion was overwhelming: The warmer the environment, the less it was rated as psychologically restorative and the greater the stress.

Visitor experience within coastal parks is associated with weather and environmental parameters. The perceived psychological and attention restoration provided by a coastal park is influenced by air and water quality. Perceived restorativeness is significantly constrained on days with temperatures above the monthly average. Perceived restorativeness is significantly constrained during high tides, a proxy for sea living rise and beach crowding. Constraints in visitor experience to urban parks and recreational infrastructure could exacerbate psychological maladies.