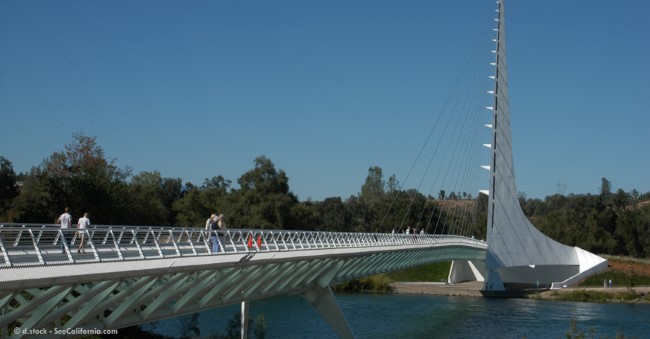 One of the nation's most beautiful, expensive, and architecturally interesting bridges can be found in Redding, California. The Sundial Bridge is a walking bridge costing over $18 million to build. Utilizing the finest materials and design work from famed Zurich, Switzerland architect Santiago Calatrava, Sundial Bridge spans the Sacramento River near Redding's Turtle Bay and Redding Convention Center.

This gleaming testament to man's innovation and creativity officially opened and was dedicated on July 4, 2004. Not only did it help put Redding on the map with positive publicity, it also began to provide an easily accessible path for bicyclists, joggers, walkers and those just seeking to watch the fisherman in the river below.

When you go to Redding, the Sundial Bridge is lovely to walk on but is also amazing to study. Wander and explore different angles where to see how it looks from the ground, in the distance, and in daylight and at sunset when the bridge begins to glow with artificial lights. What a delight!

The Sundial Bridge is beautiful because of its aqua green, opaque glass deck; strips of granite; and smooth, white imported Spanish tile. The bridge is unique because of its design. The 217-foot pylon acts as a sundial, telling time on a tile covered garden border on the north side of the bridge. The designer of the bridge, world-renowned architect Santiago Calatrava, has said that, to him, the bridge resembles a bird in flight, and symbolizes the overcoming of adversity. The bridge is also environmentally sensitive to its river setting. The tall pylon and cable stays allow this unique suspension bridge to avoid the nearby salmon-spawning habitat. Several fly fishing publications and professional guides have rated this area of the Sacramento River as being in the top 10 tail water fisheries in the world!

Cost: There is NO CHARGE to visit or walk across the Sundial Bridge!
Directions: I-5 to Exit 678/Eureka. One mile west to Exit 1/Park Marina Drive. Right at top of off-ramp--stay right, but merge to the left-hand lane to the northeast Convention Center parking lot.

Special Requests: No horses or skateboards on the bridge, please. Bicycles should be walked across. Dogs are allowed on the Sacramento River Trail and, therefore, on the bridge; however, with the exception of service dogs, there are no dogs allowed on the Turtle Bay Exploration Park campus. The bridge's glass deck can get hot. Please remember this when walking your pets across the bridge.

Santiago Calatrava is an architect of an aesthetic sensibility so refined he has been described as "the poet of glass and steel."

The product of this unusual collaboration, when it is unveiled with an appropriate celebration of fireworks on July 4, will be a $23 million, 700-foot-long, 23-foot-wide work of art, the likes of which has never been seen spanning the generally unadorned northern reaches of the Sacramento River.

Calatrava, who was born in Spain and makes his headquarters in Zurich, has designed a bridge so airy in concept that it will at no point touch the water. That's an important environmental as well as artistic consideration, since this particular bend in the river, called Turtle Bay, serves as a maternity ward for thousands of spawning Chinook salmon. Instead, the span will be supported by 4,342 feet of steel cable suspended from a single, glistening white, 217-foot-high pylon that resembles an egret in flight more than it does an ordinary bridge tower. The pylon, situated at the exact north end of the bridge, will do double duty as a sundial, casting its elegant shadow on a grassy plaza.

"If it's going to be a sun-dial," suggested Bob Warren, tourist program manager for the City of Redding, with withering logic, "then let's call it the Sundial Bridge." And so it has become the Sundial Bridge at Turtle Bay. The span connects the northern and southern campuses of Turtle Bay Exploration Park, a 300-acre, $64 million venue for museums, an aquarium, and bird and animal sanctuaries, all joined to a vast network of hiking and bicycling trails that will ultimately reach Shasta Lake, eight miles or so upriver.

Calatrava has designed more than a dozen bridges throughout Europe, as well as other structures ranging from concert halls to train stations. All display the creative passion of a man who paints and sculpts in his spare time.

"I was surprised, of course, to receive a call in Switzerland from California," Calatrava says. "But I was very much impressed by the commitment of these clients to do something special for their community. I agreed to go to Redding, and once there I saw how unbelievably beautiful their river was, with its surrounding mountains and forest. There was also the challenge to build something that would fit in with the topography, something that would not disturb the environment--a bridge that would not even touch the water."

Calatrava appeared with a model of his bridge at civic receptions and public hearings in Redding, wowing everyone there with his engaging personality. The Sundial Bridge is the McConnell Foundation's and Redding's pičce de résistance.