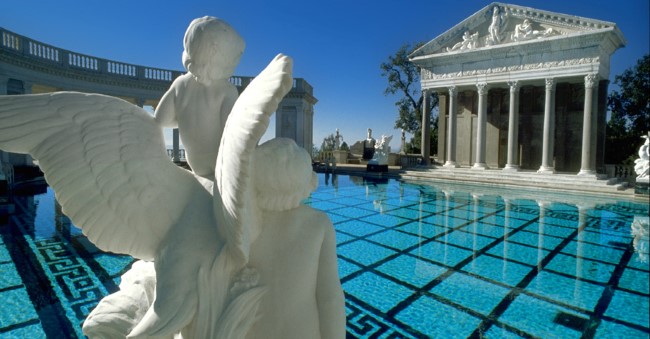 San Simeon, Calif.--On a hilltop overlooking the Pacific Ocean in the Santa Lucia Mountains five miles inland and 1,600 feet above San Simeon Bay, is the magnificent Hearst Castle. Shown in the photo is the famed Neptune Pool.

For nearly 25 years from 1922 until 1947 craftsmen labored to create an estate of 165 rooms and 127 acres of gardens and pools. Integrating decorative elements primarily from southern Europe, an impressive collection of Spanish and Italian antiques and art graced elegant rooms that can be seen today in tours available through California State Parks.

Its name is La Cuesta Encantada, the Enchanted Hill, better known as Hearst Castle. It was once the home of newspaper publisher William Randolph Hearst. Today it is a State Historical Monument and largest revenue generator of all parks attractions, according to recent reports.

Among the highlights that guests can see are two swimming pools, Neptune Pool, one of three pools built on the site of the current one. The final version of the pool as it stands at the Castle today is 104 feet long, 58 feet wide and 95 feet wide, 3.5 feet deep at the west end, and 10 feet at the drains. Using an oil burning heating system, the pool was kept warm for privileged guests during its years in service. It seldom freezes on the Central Coast where the Castle is located, so heating is minimal now. Light-veined Vermont marble decorates the pools and colonnades, and four 17-century Italian bas-reliefs on the sides of the colonnades. The indoor pool you can also see on tours is called The Roman Pool.

Certainly recognized as one of San Luis Obispo County's landmarks and the most profitable asset in the California State Parks system, the castle and land was willed to the state as a gift that people would be allowed to view and enjoy. While San Simeon hotels are just a mile or two away from the castle, tourists really love Cambria Hotels and the romantic city with a tea house, Moonstone Beach with many hotels overlooking the Pacific Ocean. Drive just a bit further north and to enjoy another attraction, Piedras Blancas Lighthouse, during your Hearst Castle visit.

Looking up and down are a large part of your tour experience to Hearst Castle. Constantly looking up in the large halls and rooms, you'll see so much detail that you would miss if you didn't crank your head in that direction. Murals, original artwork and accents prove the devil's in the detail in this luxury estate built by the 20th century newspaper magnate, William Randolph Hearst.

The views from the estate offer 360 degree panoramas to the burnished hills of the California Central Coast. On a clear day, you can look to the ocean and the grounds below at San Simeon. There's a pier, beach, dining, some hotels and spectacular coast that includes an overlook to watch elephant seals. Now owned by the California State Parks, the Hearst Castle is open to the public for tours, with each tour providing a glimpse into some of the estate buildings and grounds.

There are approximately five daily tour options and special holiday and fundraising events at this magnificent castle.

High atop a hill in the middle of what looks farm land overlooking a beach sits this spectacular castle built by one of America's 20th century pioneers, William Randolph Hearst.

There are statues everywhere around the Hearst Castle. Lions galore, busts and full, nude figures stretched or bent in poses immortalized in marble and stone surround you at this extravagant home one rich and famous baron enjoyed during his life.

Owned by the California State Parks, the Hearst Castle is open to the public for tours. There are approximately five daily tour options and special holiday and fundraising events at this magnificent castle.