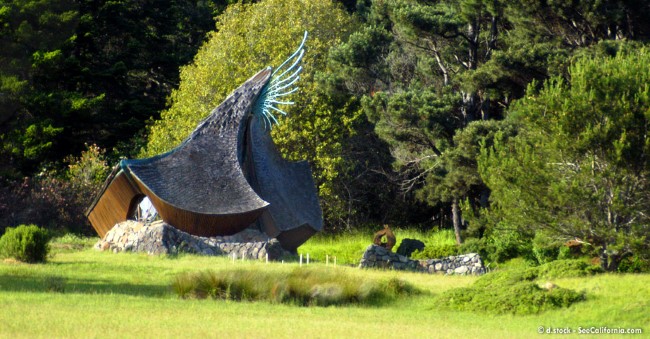 
THE SEA RANCH, CALIF. --As you drive along meandering coastal Highway 1 in Sonoma County, you'll pass The Sea Ranch heading north from San Francisco. You never know what you will see during this amazing journey-- sheep grazing, wild turkey roaming, deer and fawns munching on roadside plants and then there's the The Sea Ranch Chapel. It looks like some winged creature ready to take flight with its peacock like crest of green copper.

Designed in 1984 by James T. Hubbell, a San Diego-based architect known for his focus on blending art & architecture into the natural spaces. The Chapel is an example of his philosophy--to create unique living environments for humans to dwell in harmony with nature.

The project was built with local stone, as the artist's focus was to utilize existing supplies and materials nearby whenever possible. The chapel walls provide the foundation on which the building appears to sit while the cedar roof structure undulates in unusual shapes. It is accented with copper and crowned with a bronze spire, echoing a nearby windswept tree.

Native redwood used throughout the interior is highlighted by teak doors. Resembling the petals of a flower, an unusual plaster roof crowns the interior space complete with graceful metalwork accents found in a chandelier and screen behind a prayer desk.

Local redwood was used for the seating, which is carved rather than installed as boards.

According to the signage, the he nondenominational Chapel is for prayer and meditation. Guests are asked to please respect its sanctity, according to the guidelines of the non-profit Sea Ranch Chapel Foundation.

The Sea Ranch Chapel is open to the public daily, except during private events. The Sea Ranch residents Robert and Betty Buffum gave the chapel to the community as a gift. They wanted something in their small ocean-front community that would offer an attractive place for meditation and spiritual renewal, while providing a point of interest for passers-by, as well.

They sought out internationally-known San Diegan James T. Hubbell when they viewed many options and decided his work would best be crafted into what they envisioned. They asked him to create a masterpiece that would inspire all who passed by.

Hubbell assembled a team of local artists and craftsmen to create a structure that evoked a sense of harmony with its surroundings by echoing elements of the forest, meadow, and sky. Local talent was available with Construction Coordinator Thamby Kumaran, a contractor specializing in hand-crafted structures; Coordinating Architect Don Jacobs; and Landscape Architect George Wickstead.