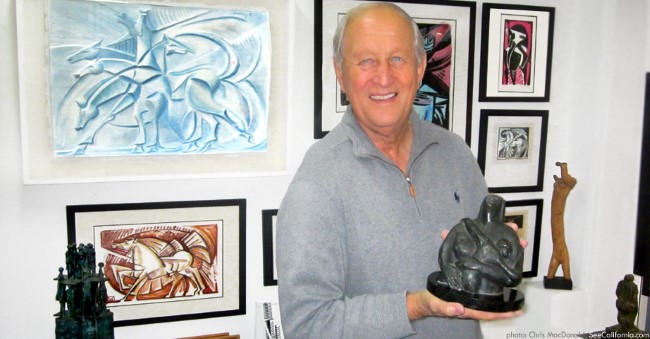 Sunset Beach, California -- Legendary Artist Bill Anderson showcases his 50 years of printmaking and sculptures for the first time at Anderson Art Gallery. The famed watercolorist, who's equally skilled in printmaking and sculptures, displays many of his favorite works, including his first carved plaster sculpture ("The Thinker") that he created at high school in 1958. He also exhibits a fascinating portrait of a person's head--his first effort at printmaking in 1962.

The renown artist, whose work has been purchased by Cameron Diaz and Herb Alpert, moved with wife Ausma from his native Minnesota to California in 1963. A longtime public school art teacher, Anderson practiced his trade alongside friends--painter Milford Zornes (whose work has been in the White House, Metropolitan, Library of Congress and Smithsonian) and Mexico's famed muralist, Raul Anguiano.

Anderson's spectacular exhibit features a variety of bronze, stone, cast paper, carved plaster and wood sculptures. One is of a mother and child; another horses; some are women and there's even an unusual female form that he created out of a large piece of driftwood that washed up on a beach after the big earthquake in 1964.

Some of his excellent printmaking features wood block, linoleum, etchings, lithography and silk screens. There's a wonderful action etching of a baseball player hitting a ball as the catcher and umpire look on. Anderson's works are in the National Museum of Watercolor in Mexico City as well as in galleries and museums around the world. If you are unable to see his work, take time to browse some of his art for sale on his website.