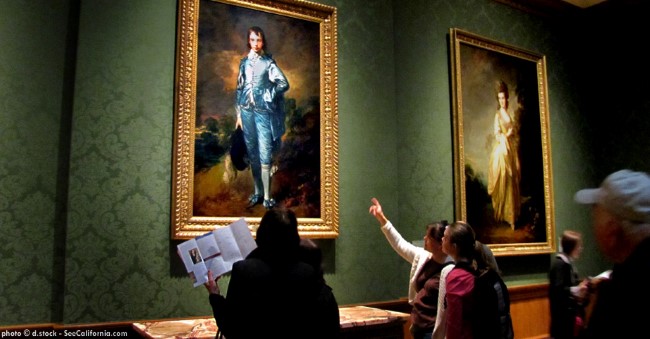 
San Marino, Calif.--If Thomas Gainsborough had met earlier success with his landscape paintings, it's hard to say if we would ever see the likes of the famed "Blue Boy", a portrait of a richly attired friend of the painter who was asked to dress in period costume for the formal painting effort. Like so many painters today who make their living doing portraits but prefer landscapes, Gainsborough became a master of portrait art.

Thomas Gainsborough, Jonathan Buttall: The Blue Boy, 1770. Oil on canvas (70 ˝ x 48 ľ inches). Acc. No. 21.1
GAINSBOROUGH, a famous British portrait painter in the 18th century, actually preferred landscape painting. But his ability to present the human figure in a relaxed, but lively pose, and depict the luxury fabrics of silk and lace explain his success as a portrait painter. The Blue Boy shows his childhood friend, Jonathan Buttall (rhymes with cuddle), who was probably a teen at the time. Gainsborough asked his friend to dress in clothes fashionable a century earlier and strike a pose associated with the wealthy. This style appears in paintings by Anthony Van Dyck, the most admired painter in Britain at this time.
Charles Sumner Greene and Henry Mather Greene (United States

Once the house of Henry E. Huntington (1850–1927) and his second wife, Arabella (1850–1924), the Huntington Art Gallery opened in 1928 displaying what was then the greatest collection of 18th-century British art in the country, including the celebrated Blue Boy by Thomas Gainsborough and Pinkie by Thomas Lawrence. Since then the collections have grown enormously and now contain many great works of art of the Italian, French and Netherlandish schools, as well as a much broader range of British art and design from the 17th to the early 20th century.

After a $20 million renovation, the gallery offers visitors an enhanced experience with one of the finest collections of European art in the nation as well as a more accurate sense of the lifestyle of one of the most prominent millionaires of the early 20th century. In addition to a thoroughly updated infrastructure, the refurbished mansion includes 5,300 additional square feet of public space, new interpretive components, and new gallery presentations of approximately 1,200 objects of European art from the 15th to the early 20th century. learn more...

Highlights include Gainsborough's The Blue Boy, Lawrence's Pinkie, the Ellesmere manuscript of Chaucer's The Canterbury Tales -circa 1410, the Gutenberg Bible -circa 1455, original letters of Washington, Jefferson, Franklin, and Lincoln, and a collection of early editions of Shakespeare.