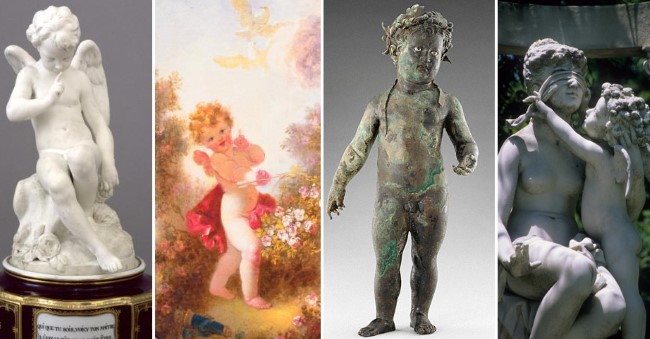 California Cupids in Art from around the Globe


Are you looking for love? We've come a long way, baby, but when it comes to love, our modern visions of love--facebooking, texting or finding love on Match.com-- don't hold a candle to romantic contributions throughout the millennia showing cupid's hand in Roman, Greek and French cultures as seen through art.

Love is timeless as you can see when you visit some very special California art museums with amazing paintings, sculptures, pottery and vases depicting cupid.

Here's one twist on love: The fable of Psyche, derived from a second-century romance by Lucius Apuleius entitled "Metamorphoses" or "The Golden Ass," is but one story that has inspired many artists to create artworks. Renowned for her beauty, Psyche had incurred the envy of Venus, who sent Cupid to make her fall in love with a monstrous creature. Instead, Cupid fell in love with Psyche; after she was brought to him they became lovers. Jean La Fontaine's translation of this tale can be seen in an art piece at The Getty. Venus Reclining on a Sea Monster with Cupid and a Putto (1785-1787) was created in marble by English artist John Deare.

If you're looking for Love, look no further than California's art museums to see depictions of love spanning over 2,000 years, and collected from around the world.

Venus Reclining on a Sea Monster with Cupid and a Putto.
www.getty.edu/

While Valentine's Day is the ideal time to visit a museum and gain insight into how the world sees and experiences romance through millennia, a better option is to put it on your list of things to do & see, because you'll be busy traveling the state of California in your quest from cupid.

Object Number: 78.20.56
Label Text: At the Salon of 1755 the sculptor Etienne-Maurice Falconet exhibited a plaster figure of a seated Cupid holding a finger to his lips to urge the viewer to silence as he reaches with his other hand for one of the arrows in the quiver at his side. It was referred to as L'Amour menacant (Love threatening) for Cupid, the god of love, is about to strike. A marble version of the figure, commissioned by Madame de Pompadour, was exhibited at the subsequent Salon in 1757. That sculpture was recorded by 1761 in the garden of her Paris residence, the hotel Pompadour (today the Elysee Palace, the official residence of the French president). Falconet made a number of copies of the Cupid, which were sold to some of the most powerful and influential people of the eighteenth century, including Empress Catherine II of Russia. An immensely popular image, it was copied by many artists, becoming one of the quintessential emblems of the eighteenth century. The same year Falconet exhibited his marble Cupid at the Salon of 1757, he was appointed head of the sculpture studio at the Royal Porcelain Manufactory at Sevres, a post he would hold until 1766, when he left France for Russia. In the early 1750s, the manufactory had begun making unglazed porcelain figures, known as biscuit, that were popular because of their resemblance to marble. By the time of Falconet's appointment, the production of biscuit porcelain figures had become a significant part of the factory's output. Falconet's model for the biscuit figure of Cupid, a reduced copy of his marble original, was put into production in 1758 (for a discussion of copies, see the essay by Malcolm Baker in this volume). It became one of the most popular figures sold at Sevres and was referred to there as L'Amour Falconet. It was initially made in one size (approximately 9 inches or 23 cm high) and usually sold for 96 livres as an independent work that could be displayed under a glass case, although some were sold with dessert services to be part of a table decoration. This example is marked with a B in script, indicating that it was produced at the manufactory while Jean-Jacques Bachelier was head of the sculpture studio between 1766 and 1773. A pendant female figure, Pendant de l'amour Falconet, was introduced at Sevres in 1761 after a design by Falconet made specifically for the royal manufactory and not as a separate sculpture in other media. It later became referred to as Psyche, and was often sold as a pair with L'Amour Falconet. Between 1761 and 1770 more than 230 pairs were sold. The model for the octagonal pedestal on which the figure loosely rests was introduced by 1760. Because it was initially designed to accompany the figures of Cupid, the pedestal was referred to as a piedestal de l'amour. This is the earliest known dated example and predates the figure of Cupid that it currently supports. It is not known when this pedestal and figure were brought together. The shape appears to be a modification of the base for the vase hollandois nouveau (see cat. 78-80), a model that was introduced during the late 1750s. This example is decorated with an underglaze blue ground with four shaped white rectangular reserves at each of the long sides. Three of the reserves are painted with polychrome sprays of flowers. The front reserve has the inscription in French, "QUI QUE TU SOIS, VOICI TON MAITRE / IL L'EST, LE FT, OU LE DOIT ÊTRE" (Whoever you are, Here is your master [Love], He is, was, or should be [your master]), a well-known couplet composed by Voltaire for another sculpture representing Cupid that was produced earlier in the eighteenth century.

Cupid Among Roses, or Love the Sentinel
Date: ca. 1775
Maker: Jean-Honore Fragonard , French, 1732 - 1806
Dimensions: 21 1/2 x 17 3/4 in. (54.6 x 45.1 cm.)
Medium: oil on canvas
Credit Line: The Huntington Library, Art Collections, and Botanical Gardens. Adele S. Browning Memorial Collection, gift of Mildred Browning Green and Honorable Lucius Peyton Green
Object Number: 78.20.4
Label Text: After 1768, Fragonard turned his back on the Salon and devoted his energies to less prestigious, more commercial endeavors. The critics that year wrote of him cynically, saying that, "instead of working for glory and for posterity, he is content to shine in boudoirs and dressing-rooms." L'Amour en Sentinelle is typical of the eighteenth-century taste for sentiment and sensuality in interiors, and Fragonard gave it a prominent position in his most famous interior decoration scheme, the suite of fourteen decorative paintings and rectangular overdoors titled The Progress of Love, now in the Frick Collection (fig. 00). The ensemble was commissioned by Madame Du Barry in 1771, but she rejected it before it was completed. In 1790 or 1791, L'Amour en Sentinelle was added along with three other rectangular overdoors showing Cupid in his various moods. The set was then sold to Monsieur Malvilan of Grasse. But Fragonard had already devised L'Amour en Sentinelle and its pendant, La Folie (Love the Jester), by the late 1770s as oval canvases; Jean-Francois Janinet (1752-1814) engraved them in 1777. Over the next two decades, Fragonard would paint at least twelve oval versions of this popular composition, making it very difficult to trace the provenance of any one version. As Cuzin notes, "the early provenance [of any versions of the subject] could be, either entirely or partially, the same as that for the other versions of the same subject." The present painting is thought to be an early example, but its provenance cannot be verified. In the eighteenth century, the painting was also known as L'Amour dans un buisson de roses (Cupid among roses). Roses and doves are symbols of love and thus of Venus, the goddess of love and mother of Cupid. Cupid's silencing gesture may derive from Falconet's much-copied marble L'Amour meneçant (Love threatening) made in 1757 for Madame de Pompadour, which appears in several of Fragonard's early paintings (see cat. 115). The viewer is left to decide whether he is urging discretion in matters of the heart or playfully pleading for silence as he pursues his quarry.

The three and a half acre rose garden was designed by Myron Hunt and first planted by William Hertrich as a display garden in 1908. In the 1970s, the garden was reorganized as a "collection garden" with more than 1,200 cultivars (approx 4,000 individual plants) arranged historically to trace the development of roses from ancient to modern times beginning with the Egyptians, Greeks, and Romans.

The entrance pathway leads to an 18th-century French stone tempietto and statue, "Love, the Captive of Youth," encircled by "French Lace" roses. The beds north of the arbor next to the Shakespeare Garden have a paved walk, and feature Tea and China roses and their descendants, first introduced into Europe from China around 1900.

Venus Reclining on a Sea Monster with Cupid and a Putto.
www.getty.edu/art/gettyguide/artObjectDetails?artobj=113424

The Abduction of Psyche by Zephyrus to the Palace of Eros, After 1808, probably before 1820

Jean La Fontaine's translation of the fable of Psyche, derived from a second-century romance by Lucius Apuleius entitled "Metamorphoses" or "The Golden Ass," was widely read in the early 19th century. Renowned for her beauty, Psyche had incurred the envy of Venus, who sent Cupid to make her fall in love with a monstrous creature. Instead, Cupid fell in love with Psyche; after she was brought to him they became lovers.

Study After Guido Cagnacci: Venus Conquered by Love (from the Palazzo Zambeccari), 1760-61