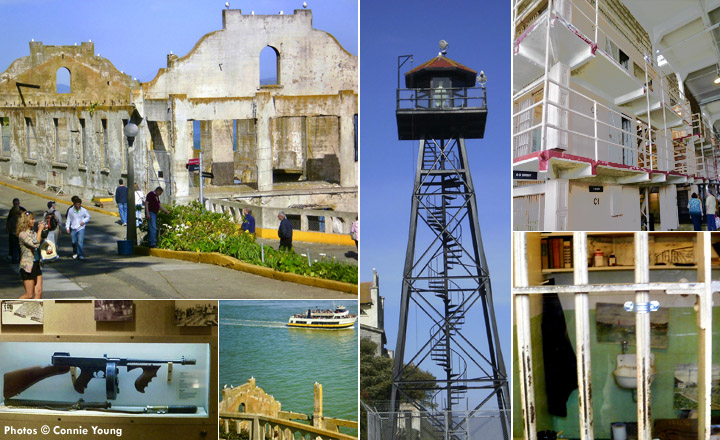 Almost everyone can visualize San Francisco, with its famed cable cars and the Golden Gate Bridge. Although visited by many, not everyone has experienced Alcatraz Island, home to the "inescapable" prison.

The ferry's destination is only 1 mile offshore, but passengers are transported from the present to a legendary period of time and place when the nation's worst were incarcerated here.
Now a National Park, a uniformed park ranger greets "new arrivals" with a brief overview of the history of Alcatraz before turning visitors loose to explore the grounds, gift shop and cell blocks. There is a tram for persons who would have difficulty navigating the moderate ramps up to the jail.

On the main floor of the building, there is an orientation film telling the history of Alcatraz's dangerous inmates and violent past, and some displays showing life on the island for families of officials assigned here. It's hard to imagine their children roaming the island and traveling to school on a boat through the fog daily. Once inside the cell block there are only stairs though and several flights are involved to see the entire building.

The big treat is the cell block itself. A triple layer of inmate cells, roughly 4 feet wide and 8 feet deep gets to the nitty-gritty of the depressing, cramped lifestyle these people led. The "Birdman of Alcatraz" resided here. The majority of cells were empty of furnishings but a few were models showing the everyday life of inmates. Some were hobbyists and their paintings were on display.

They say Alcatraz is haunted by the spirits who never escaped their lives here. Several paranormal groups have spent time on Alcatraz investigating. Well, I have my own story. My traveling companion and I were on the main floor of the cell block. There were hundreds of other tourists with us. The cells are located in the middle of the building with floor space that surrounds the three levels of cells. The sun was coming in the windows on the east side of the building and we were in the middle of the triple deck cells in the shade. We looked up to see two men coming around the far corner of the second floor cells. Each person went into a separate cell on the east side of the corridor. Because they and we were in the shade, we only saw the silhouettes of these people walking and turning into the cells. My friend said, "Let's go up on the second floor too!" I immediately wondered why we didn't see lots of people on the second floor because there were so many of us on the first floor. I followed her to the end of the cell block to find the stairs. We came upon a Plexiglas, fixed cover over the stairs that was chained and padlocked. No tourists had gotten to the second floor. Ooookaaay. That's our story and we're sticking to it.

A wonderful gift shop on the grounds stocks the serious and whimsical – historical accounts of the inmates and the history of the prison as well as humorous jail themed odds and ends.