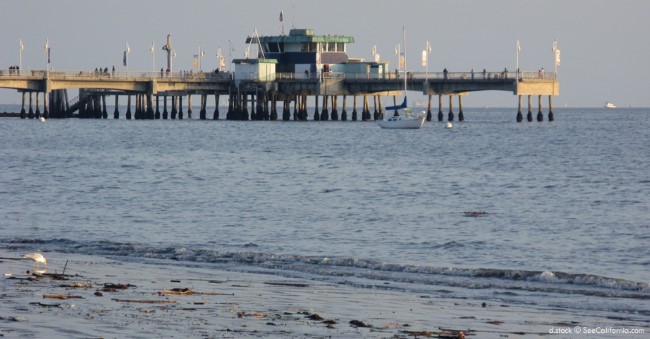 Long Beach, California-- Belmont Pier is a popular fishing pier in Long Beach, Calif. As a public pier, the fishing is free entertainment--no license required.  Belmont Shore,  a community in Long Beach south of the downtown high-rise buildings overlooks much activity in the bay. Huge cargo ships come into port from around the world, unloading their freight, and loading products and materials in the Port of Long Beach and Port of Los Angeles.

The history of how the Belmont Memorial Veteran's Pier came about is quite interesting. Local citizens wanted a pier and they couldn't afford to build one. So some creative bartering ensued and eventually the pier was completed--but not without a major compromise. By agreeing to have the pier built, residents of Belmont Shore were required to relinquish their rights as citizens of the community, and be annexed by Long Beach!

Today, Belmont Shore & nearby Naples run along 2nd Street and Ocean Avenue on the southern most end of the city. Tourists recognize the area because of its shopping district, business association, pier and recreation center with the landmark Belmont Pool where an Olympic gold medalist has taught swim lessons for years.  Several thousand residents share a passion for their community of Belmont Shore.

Residents of Belmont Heights voted to become the City of Belmont in 1908. They were tired of high taxes imposed by the City of Long Beach. Only one year later they rejoined Long Beach, however, and eventually got their pier in 1915.

The current pier was built in 1966, replacing a wooden pier that stood for over 50 years. The 1,620 foot-long concrete pier has experienced structural damage but is receiving a renovation.

The pier is located at Ocean and 39th Place. It offers free public fishing with no license  required as long as you stay on the pier to fish. Pay parking is available in a public lot near the base of the pier.