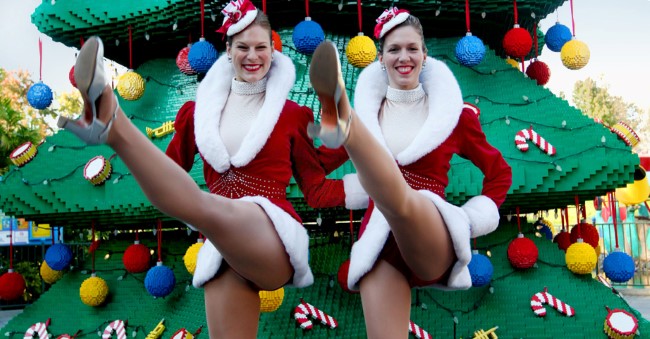 CARLSBAD, Calif. -- An annual holiday celebration is held at Legoland California, featuring a giant tree and ornaments made out of Duplo bricks. Each year guest celebrities help light the tree in an official ceremony.

World famous Radio City Rockettes helped "kick" off the holidays by dancing their way into Legoland California and even putting the final touches on the theme park's giant tree made with Lego bricks. On their way to holiday performances in San Diego, The Rockettes are on tour with Radio City Christmas Spectacular appearing at the San Diego Sports Arena on Dec. 3, 4 and 5, 2010.

The Park's annual tree lighting takes place Nov. 29 when celebrity guest Brooke Burke from "Dancing with the Stars" lights the giant tree which stands more than 30-feet-tall and is made of more than 245,000 forest green bricks.

The tree lighting is the start of LEGOLAND California's Holly Jolly Holidays celebration which runs through Dec. 31 when the season concludes with Kids' New Year's Eve. The theme park transforms into a holiday wonderland during Holly Jolly Holidays which features festive entertainment every weekend including carolers, elves and strolling musicians; nightly fireworks Dec. 26 through 30 and an enchanting holiday musical.

All Holly Jolly Holidays activities are included in the price of LEGOLAND California admission ($67 for adults, $57 for kids).

Families gather around the giant tree which stands more than 30-feet-tall, is made of more than 245,000 forest green DUPLO® bricks and surrounded by packages and LEGO friends the whole family can enjoy. The event features festive entertainment, fireworks and a visit from Santa himself!

Let It Snow –  an enchanting mini musical returns with a holiday story that is sure to warm guests' hearts. Share in the spirit of the holidays with 10-year-old Emily as she wishes for some holiday magic! Emily's toys spring to life in a musical celebration as they help her realize her Yuletide wish – snow! Will the weather forecast change in southern California just for Emily? The 20 minute musical holiday show features the Park's signature song, "Season of Imagination." "Let it Snow" runs daily from Nov. 20 through Dec. 31 in the Playtown Theater.

A stunning display of fireworks lights up the sky over LEGOLAND California nightly Dec. 26 – 30 at 7 pm. as part the Park's Holly Jolly Holidays celebration. The festive fireworks are choreographed to holiday songs from around the world. The best viewing spot is Miniland U.S.A. which is also decked out for the season with holiday scenes in every miniature city.

Midnight strikes at 6 p.m. in LEGOLAND California with the earliest New Year's celebration in San Diego County – Kids' New Year's Eve! Like the famous Times Square party, Kids' New Year's Eve, presented by Western Dental, features a countdown followed by a huge LEGO brick dropping 22-feet into 2011 and a dazzling fireworks display. The party begins at 4 p.m. and includes performances by Justin Roberts and the Not Ready for Naptime Players. Call: (760) 918-LEGO. legoland.com