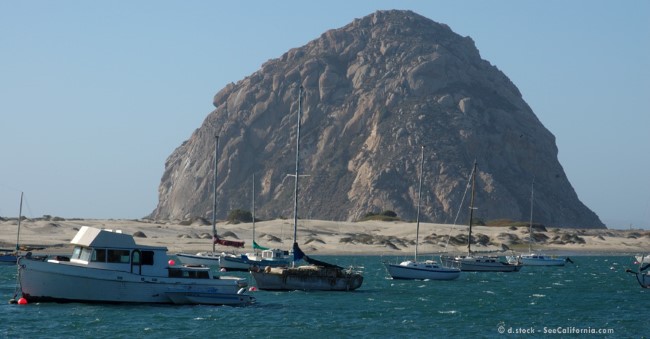 One of the top attractions on the Central California is Morro Rock in Morro Bay, a beach city north of Pismo Beach and south of San Simeon, home to Hearst Castle. The State Historic Landmark #801 of Morro Rock, which towers 576 feet at the entrance to the harbor, was named by Juan Cabrillo during his voyage of discovery along the California  coast in 1542. Today tourists can walk over to the rock and walk around it. It is one of the most visible landmarks on the Central Coast California, and is visible from many commercial flights.

Morro, or the crown in Spanish is part of the Morro Rock State Preserve of the California State Parks. While its size and presence looms large in the cozy beach town of Morro Bay, it has been chipped away from its original size when rocks from it were used for to create a jetties for Morro Bay and Port San Luis in Avila Beach nearby. This 22-23 million year old rock isn't alone on the coast--it is one of Nine Sisters of rocks that extend from Morro Bay to San Luis Obispo hills. The rocks probably came about from volcanic activity.

It is likely that the morros erupted along old fault lines, leading to a hot spot deep within the earth.  Black Hill, the 665 foot "sister" rock that rises behind Morro Bay Golf Course, and Hollister Peak are about 28 million years old, dating to the Oligocene epoch of geologic history.

The morros may have formed, then moved along the San Andreas fault to their current positions.  Theories also suggest that 18,000 - 20,000 years ago the sea level was 300 ft. lower than today, and Morro Rock stood on dry land. After the last glacial retreat, the sea rose again and Morro Rock was surrounded by salt water.

In 1933 a causeway with materials blasted from the rock was made through Works Progress Administration. Volcanic plugs tend to have steep sides of exposed rock, although buttresses slope from these peaks to make all of them accessible. The Morro Rock's shape has been altered by the chipping away, however.

The Chorro Valley surrounds the Morros and features several hundred Chumash Indian mortar sites. If you would like to learn more about the history and geology of Morro Rock and other morros, visit the Morro Bay Museum of Natural History.