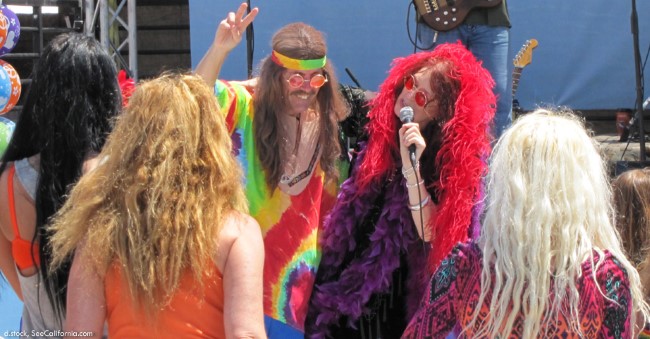 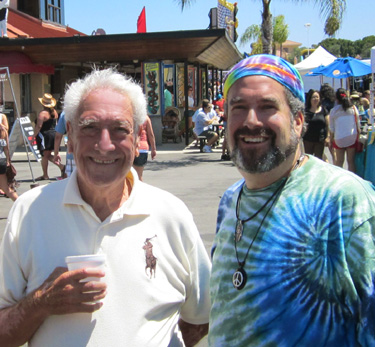 There's something refreshingly different about the Orange County Market Place on the OC Fairgrounds that you won't find at your usual Swap Meets, Flea Markets or Farmers' Markets. You might see Elvis impersonators, Irish dancing, stilt walkers, kiddie carnival rides, acres of free parking, over 1,000 vendors selling just about everything you can imagine and more than 50,000 customers on many weekends (except when the OC Fair is in session).

The OC Market Place is clean; it's fun; it has a family atmosphere; delicious food and drink and enthusiastic entertainment that will draw you back time and time again. No wonder a USA Today columnist recently called it, "...probably the most unique and successful Swap Meet in the country." Come and see for yourself.

A major reason for its festive aura and success is because of its founder, the imaginative Bob Teller, who was able to convince the right officials that a Market Place made sense and would not only delight its guests at the largely unused fairgrounds but bring in significant, much-needed funds to the state. Teller's friendly and knowledgeable son, Jeff, now runs the show, helping bring the magic to life on the weekends.

It's funny how Bob got into the game in the first place. In 1957, he and his girlfriend, Rita (who would later become his wife), did not even know what a "Swap Meet" was when they saw a man in Phoenix painting those words on a sign. They asked the fellow, then decided to round up some of Bob's old shirts and brought them to sell for 50-cents. "We were mobbed and couldn't even hang the shirts before people would buy them," Bob recalled. "Rita kept changing the price until it was $2 per shirt, more than I had paid for them new. We made $300!"

He has pretty much had "demand chasing supply" in his business ventures ever since. Bob and Rita came to California and he created the "Bob's Old Fashioned Ice Cream Bars" empire that started on Balboa Peninsula ("Balboa Bars") and expanded to 70 stores, mainly in regional shopping malls. That idea for the business started because Rita wanted a non-frozen ice cream bar dipped in chocolate and had a hard time getting one. "When chocolate is frozen, it loses 70% of its flavor," Bob explained. "There's always a positive in a negative and we made a successful business out of it." The rest is history and, even though Bob has sold off his stores, you can still get the very special treat at the Market Place, where different charities earn all the profit from selling the delicious bars.

In 1969, the OC Market Place officially opened. The man who says "Attitude is Everything," placed an ad in the Pennysaver showing Sellers would only have to pay $1. But he also had a "$1 Off Coupon" for vendors, so they got to sell their wares for Free!

"We had 100 vendors the first weekend but I did well by selling ice cream, hotdogs and softdrinks," said the University of Arizona grad, who learned that "Happiness is a Choice." "We've been growing ever since and have more than 10-times the vendors and thousands of customers on the weekends."

"You've got to treat your guests right and not only have things they're interested in but vendors who stand by their products," Bob explained. And, as Walt Disney once said, "Disneyland will never be completed as long as there's imagination in the World," so too, OC Market Place is constantly using innovation to add new experiences for its guests. They've added kids Carnival Rides, offer a variety of food, entertainment and concerts, not only during Holiday Seasons like Christmas, St. Patrick's Day and Halloween but fun Rockabilly, Woodstock and an annual Elvis Festival (Aug. 26 from 9-4 featuring some of Elvis real friends and fellow actors as well as fantastic impersonators).

There definitely will be Elvis sightings all over SoCal, when these impersonators make their way to the OC Market Place to perform at "The Magic of Elvis"--you've got to see it to believe it! But celebrity sightings are nothing new at the Market Place. Bob said Elizabeth Taylor once visited and I saw LA Dodger legend Maury Wills.

The neat thing about the Market Place is that it literally offers something for everybody, regardless of age, taste, style or humor. You and your family will have fun in the sun and even get to park for Free. There's a nominal admission fee or you can get in Free by going to http://www.huntingtonbeachcoupon.com/; click on the OC Market Place coupon and print it. The Market Place is open from 7am to 4pm Saturday and Sundays (except when the OC Fair is in session) at the OC Fairgrounds, 88 Fair Drive, Costa Mesa; http://www.ocmarketplace.com/ or call 949-723-6616.