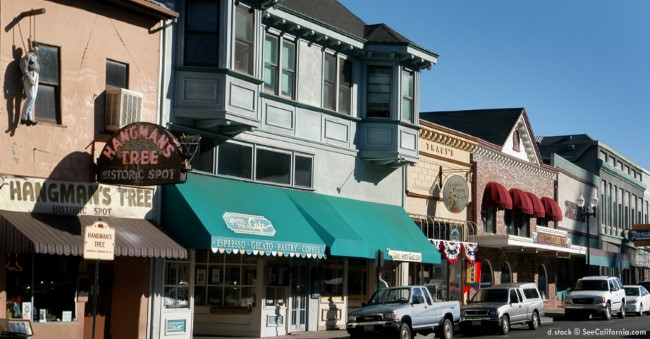 HANGMAN'S TREE - In the days of 1849, when this city was called Hangtown, vigilantes executed many men for various crimes. This was the site of Hay Yard, on which stood the 'Hangman's Tree.' The stump of the tree is under the building on which the plaque is placed.
Location: 305 Main St. Placerville

Placerville in the California Gold Country was once called Hangtown. An effigy of a man being hung is roped from the second floor of a building where the Hangman's Tree bar, an historic spot marks the spot of the town hangings. Gold was discovered in this region, and the wild west atmosphere created a dire need for laws to regulate criminals and those who took what they wanted, including lives. Hangtown was one of the first places where justice was delivered with a rope from a tree. It was initially called Dry Diggins but changed its name to Hangtown for the many hangings that meted swift justice to offenders during the mid 1800's.

Located less than two hours along scenic roads outside of Sacramento (one of the best places in California to learn about the Gold Rush,) you'll find a town that really captures the essence of an era in California history that shaped our economy, melting pot cultural diversity, and sent word of California throughout the world.

Take a drive along the wheat-colored hills and meadows outside Sacramento and the landscapes begin to change as you enter the Sierra foothills.  The seat of El Dorado County is Placerville, located at 2,000' elevation.

Main Street, the heart of Placerville's downtown is lined with historic buildings that are well preserved with fresh coats of paint. With something so historic and authentic you feel like it should be remote. However, Main Street is a bustling place and a stop at a coffee house yields interesting results that the people come from around the world (just like they did during the Gold Rush) to experience this unique place partially frozen in time.

Locals embrace history (or they wouldn't be there) and they are amazingly versed in the California Gold Rush and the Old West.

In Placerville, modern conveniences such as Starbucks mix with turn-of-the 20th Century Cary House, a bed and breakfast-styled hotel featuring themed rooms, many with antique furnishings. On special evenings, the owners of the property dress in period costume and re-create scenes from the era in which the hotel was constructed. Enjoying rich soil perfect for wine grapes, the B&B rolls out some of its fine local wines for adult guests to sample in the evening. While a visit to El Dorado's wine country and stay at Cary House is more than enough excuse to take a brake, there's a lot more going on.

Placerville and El Dorado County are located in the heart of California's Gold Rush country, often called the "Mother Lode."  El Dorado County is approximately 30 miles east of Sacramento, California's State Capitol and 40 miles west of Carson City, Nevada's State Capitol. San Francisco is 125 miles to the west and Reno Airport is 50 miles to the northeast.

Placerville credited for the discovery of gold over 150 years ago, Placerville grew rapidly out of the rush from gold fever and today, families and descendants of that era still live in town and operate the stores passed down through generations.   Shown in photos above is a woman in front of a store with a newspaper stand. Placerville News Company, 409 Main Street, Placerville. This store is located in an historic 1856 building in downtown Placerville. The Placerville News Company has been in the same location since 1912
Several ghosts are said to live in Placerville (once called Hangtown) but none are more recognized than the Hangman's Tree ghost. The California Historical Landmark NO. 141 commemorates a tree, which once grew on the grounds of the Hangman's Tree Saloon.  It is not known if the ghost is the late Colis Huntington, the California railroad magnate, who once owned the building. What is known about this spirit is that it likes to play tricks. It may move and object or make something temporarily disappear, according to one bartender there.

The Hangman's Tree Saloon ghost is not the only spirit that's still around. Across the street at the Carey House, the beautifully restored hotel filled with antiques and charm, likewise makes a good home for another friendly, invisible creature.  There are likely many ghosts of this ghost town that once served the California Gold Rush. It was initially called Dry Diggins but changed its name to Hangtown for the many hangings that meted swift justice to offenders during the mid 1800's.

As you drive into Placerville, which exudes the charm of over 150 years of formation as a city, the lifelike dummy  with a plaid shirt, a single suspender, work pants and  boots noticeably hangs near a second story window of  what formerly was the Hangman's Tree Tavern.