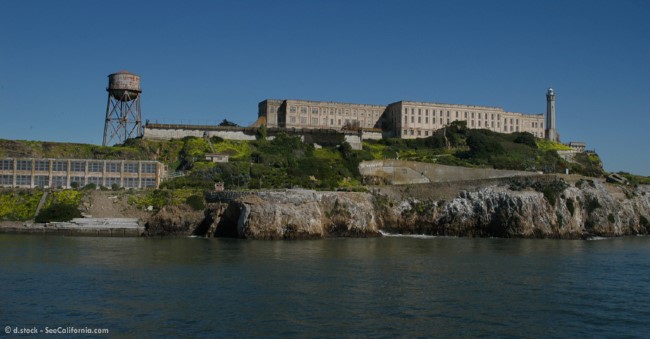 San Francisco , CA -- Alcatraz Island is part of Golden Gate National Recreation Area, and is operated by National Park Service. This deactivated prison where notorious criminals such as Al Capone, Machine Gun Kelly, and the Birdman of Alcatraz (Robert Stroud), all served prison sentences "on the rock," is an extremely popular tourist attraction. Only accessible by booking your ride on one of the Alcatraz tour boats, you get to explore this once forbidden fortress where legend had it that no prisoner could escape and live to talk about it (though many tried.)

Some say spirits still reside in this cold, damp decaying structure, and many people go there to experience first-hand encounters.

Alcatraz was named for the Spanish word alcatraces, meaning "strange bird" - a reference to pelicans living on the island when it was visited by the Spanish explorers.  Alcatraces was originally the name for what is now Yerba Buena Island in the San Francisco Bay. In 1775, the name transferred to the current site with the US Coast Guard Survey shortening the name to Alcatraz in 1851.

Visitors can explore the island for the day, simply cruise around the island on a tour boat without getting off or visit on one of the evening excursions.  Both Red & White or Blue & Gold Fleets offer tours around Alcatraz Island, Hornblower Dinner Cruises allow guests to dine & bask on a yacht in the bay overlooking the island, and Hornblower also holds a concessionaire contract from Pier 39 to Alcatraz.