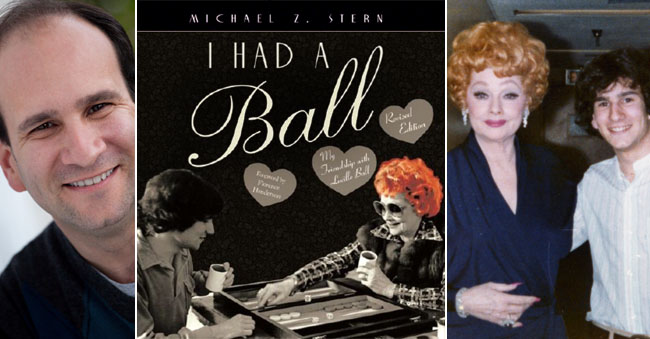 Book Review: "I Had a Ball—My Friendship with Lucille Ball" by Michael Stern

"The 40-foot tall, red-haired lady on the screen had my complete focus." –Young Michael Stern watching the Lucy movie, "Yours, Mine and Ours"

Most of Michael Stern's life has been focused on Lucille Ball—first as a kid fan, then as a close friend. His relationship with one of the most famous celebrities ever is amazing in itself.

In Michael's book, "I Had a Ball," you'll get an inside peek into Hollywood and how his undying devotion to Lucy led to a friendship where the mega-star labeled him, "My #1 Fan."

This is a rare insight into the remarkable comedian and actor, who can still be seen in TV reruns as Lucy Ricardo. You'll learn about the devoted family members and people around her who helped make her a success; how she helped numerous charities; taught college courses; wrote books and interacted with others in her professional and private lives.

Lucy's mother, DeDe, who he met at a show filming, introduced him to the star. Over time, he became Lucy's real pal, playing backgammon with her in her home, getting phone calls and gifts from her on his birthday; locating shoes, linen and mattresses for her, receiving her advice ("Make sure you stay in school and get a job"), working for her company and becoming a part of her extended family.

The book's a good insight into how Hollywood works. You'll see the people in Lucy's inner circle, like her wonderful secretary Wanda, who played key roles in Lucy's success and the relationship that developed between the star and star-struck Michael. There are numerous rare photos of the author with Lucy, Desi Arnaz Sr. and Jr., Doris Day, Carol Channing and so many others.

Michael was with Lucy on her rollercoaster career in Hollywood. He even sat next to her watching old "I Love Lucy Shows," where she enjoyed laughing at her hilarious co-stars. His priceless tribute paints a picture of a hardworking, down-to-earth talent, who cared for those around her and excelled in getting things just right. Millions of fans would agree that Lucy's talent and hilarity were unparalleled.

Through his excellent writing ("With her red hair ablaze, Lucy engaged the audience with all of herself"), Michael provides a fun look at the funny lady.

To this day, he wears a watch Lucy gave him. No matter what time, she will always remain an important part of his life. And, she'll always remain an important part of all our lives. I have always loved watching Lucy on TV. She has made—and continues to make—the world a much happier place with her presence. We all definitely need to laugh more often. Thanks to Lucy we do and always will!