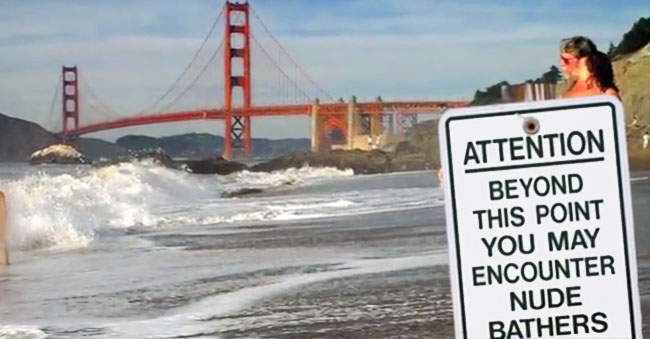 Pictured is a beach near the Golden Gate Bridge Beach or Marshall's in San Francisco with a sign posted: ATTENTION....BEYOND THIS POINT YOU MAY ENCOUNTER NUDE BATHERS. It is frequented by nude sunbathers.

Is it Rude to Be Nude on California Beaches?
Answer: In most cases it is against the law!

This month a Boy Scout troop inadvertently ended up at a Black's nude beach at Torrey Pines (San Diego County.) It's not an easy feat to find nude beaches in Southern California, much less accidentally run into one. However, there are a few remaining beaches in California where nudity is tolerated and they include Black's, a popular and somewhat remote surfer beach where sunbathers like to go to hang out, pun intended. Nudity was permitted at San Onofre State Beach near the San Diego/ Orange County border till several years ago when park rangers began writing tickets. There had been complaints from adults who passed by the nudist area and didn't like it. Attorneys for a nudity group fought and lost the case--it's the way things are going at most California beaches. Once tolerant Californians are deciding that being nude is just plain rude, and they're not going to take it. However, there are a few remaining clothing optional beaches in San Francisco, Santa Cruz, San Mateo, Monterey and San Luis Obispo Counties. Given enough time, those may eventually disappear, as well. For now, the general rule of thumb is to see if people are sunbathing nude, and if you're really brave, go ask a lifeguard (often there's none around at nude beaches) just so you can get the head's up on the situation.