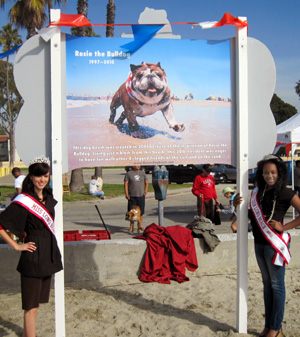 Long Beach, California--The City of Long Beach has the only Dog Beach in Los Angeles County, thanks to an Alabama native who moved to Belmont Shore and realized there needed to be a place for dogs to run and enjoy the ocean.

Justin Rudd researched Long Beach city code and discovered that you can have dogs on the beach only for special events. First, he hosted one event in which 400 to 500 dogs came with owners. 20 months & 20 events later there was no doubt that the dogs were well-behaved (thanks to responsible owners), and with the blessings of the city, a pilot program began in 2001. After a successful trial period, the Dog Zone was formed as a permanent attraction for pet owners in 2003.

Located in Belmont Shore on Ocean Blvd. between between Argonne Ave. & Roycroft Ave., the three acre, off-leash Dog Zone received a new name in December 2010. It is now called "Rosie's Dog Beach" in memory of Rudd's English Bulldog who passed away this year.

Rudd and partner Ralph Cordero of Belmont Shore decided that "Dog Zone" lacked the warm, fuzzy feeling that people get when they bring their pets to Long Beach for a romp in the ocean.

"People started coming up to us after attending events and said, ‘Hello, Rosie!' to Justin's new Bulldog, Riley," said Cordero. Approaching staff and City Council members, Cordero requested the Dog Zone be changed in honor of Rosie, who so many identified with the efforts to create a dog-friendly beach.

"Everyone came on board with the concept," said Mark Sandoval, Marine Bureau manager, who was approached by Cordero in 2009 and spoke to City Council about changing the name. Mayor Bob Foster, his wife Nancy, and Council Member Gary DeLong were some of the people who helped make it happen.

A proclamation was awarded by field representative Tim Patton from Assembly Member Bonnie Lowenthal's office, and a blessing for the beach was offered.

Note: A commemorative sign states: "Rosie the Bulldog lived from 1997 to 2010. This dog beach was created in 2001 because of the inspiration of Rosie the Bulldog. Living just a block from this beach, this 38 lb. resident was eager to have fun with other 4-legged friends at the surf and on the sand. -Rosiesdogbeach.com"