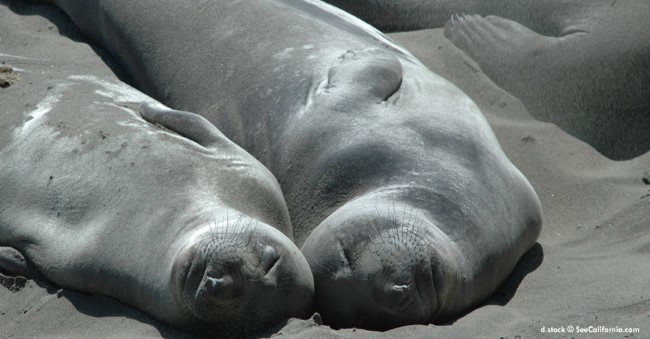 As you visit the Elephant Seal Rookery, a roadside attraction between Big Sur and San Simeon (Hearst Castle) on the Central California coast, be sure to bring a camera and be prepared to snap or click away. You are not allowed to wander beyond the ropes to get closer to the elephant seal action as these creatures that live half on land-half on sea, wear 2 1/2 tons!

Elephant seal breeding season begins in Ano Nuevo around December when the first males arrive. Slinking in from the sea, the move slow and methodically with a purpose. The crowd of humans is kept on the hill vista above the beach and isn't allowed to wander near for safety reasons--one of these creatures feeling threatened could easily smash a human and crush him with little or no effort. From fourteen to sixteen feet long and weighing up to 2 1/2 tons, these huge bulls engage in violent battles to establish dominance. The successful bulls do much of the breeding, with most of the duty falling on the "alpha" bull at the top of the social stratus. If their seemingly violent behavior doesn't provide enough indication of the danger for humans, then just watch for a while. You'll figure it out that you can see plenty of action from the hill above, which is generally considered safe, though they can climb hills and chase.

1,950 elephant seal pups were born at Piedras Blancas in one year, and the total population was previously calculated at around 8,000 part-time residents to this beach. While the total population of a rookery is difficult to estimate since all members are never present at the same time, researchers multiply the number of pups born times 3.5-4.5 to get an approximation.

When visiting, look for Friends of the Elephant Seal, or drop by the office nearby at Plaza del Cavalier, 250 San Simeon Ave. Suite 3B, San Simeon, CA 93452