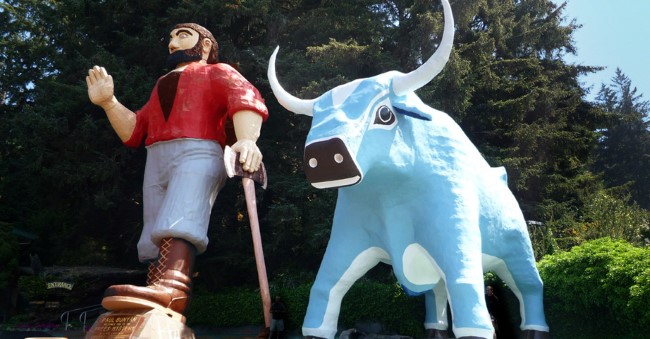 Klamath is located along the very long Highway 101 that stretches between Southern California and Northern California, where you'll find the tallest redwood trees in the world. Klamath is among some of the these super-tall trees. You'll find it between Arcata and Crescent City on the north coast of California.

Klamath Chamber of Commerce provides information, events lists and resources for your relocation and business needs.

Trees of Mystery is a roadside attraction and tourist trap in Klamath, California. This private enterprise is located adjacent to US Highway 101 on private land surrounded by Redwood National and State Parks. The property contains a number of unique tree formations, hence its name. It includes a statue of Paul Bunyan and Babe the Blue Ox. In 2001 an aerial tramway was installed called the Sky Trail. It takes visitors to an observation deck where they can enjoy a view of the Pacific Ocean and surrounding forest.

Trees of Mystery contains a world class The End of the Trail Museum, Native American Indian Museum with rooms filled with collections arranged by geographic areas rather than by tribes. As one of the largest, private collections of Native American art, crafts and tools in the world, it is a must-see, and the admission is free. treesofmystery.net

Home to the big burlwood decorations used in tables, furniture and wood sculptures, there's a testament to wood and mythology at the entrance to Trees of Mystery. A giant 49 foot tall statue of Paul Bunyan and 35 foot tall Babe the Blue Ox built in 1961 and refurbished recently, is one of the top tourist attractions in Klamath. In 2007, Babe's 1000 pound, 9 foot wide head fell to the ground but was replaced. And the myths such as Babe and Bigfoot continue to reign supreme.

Trees of Mystery in Klamath is an 0.8 mile groomed interpretive trail through Redwood forests. The Trail of Tall Tales is a portion of the trail devoted to the myth and mythology of Paul Bunyan.

Paul Bunyan and his big blue ox were said to be a larger-than-life logger and his animal companion made popular around 1910 -1916, when it may have been invented by journalist James MacGillivray, then used for a logging ad campaign (around 1916.)

Located 36 miles south of the Oregon border and 320 miles north of San Francisco, the Klamath River is a popular sports mecca for outdoor activities.

(Please bear in mind that Paul grew up in a logging camp and has the typical sense of humor that most loggers have.)