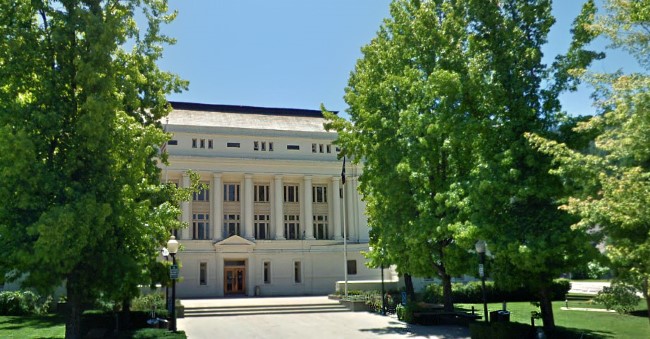 Quincy attractions, events things to do:

Quincy is nestled against the western slope of the Sierra Nevada mountains and is just on the edge of the American Valley. It is the county seat for Plumas County.

For a spectacular drive that begins or ends in Quincy take the Quincy/Oroville Road. 16 miles outside of town on Bucks Lake Road follow the Big Creek Route to the top to see one of the largest stands of dogwood trees in the U.S.! Along with a beautiful view of the valley below you can see several meadows of aspen and creek willows. You'll also be treated to leaf maples, conifers and brilliant hardwoods.

One of the most famous trees in Quincy on old Thompson Road is an old English maple with leaves that turn champagne pink and deep scarlet in the fall.

10 miles east of Quincy is the 24,000 acre Buck Lake Wilderness surrounding Silver Lake. Most of the region which ranges in elevations from 2,00 to over 7,000 feet is primitive and challenging for humans to access.

Main Street features the Plumas County Courthouse, a four story structure built in 1921. It includes beautiful lawns that showcase huge marble columns and staircases. The Quincy self-guided walking tour of 61 businesses and homes is a 17 block walk (under 2 miles) that begins at the Plumas County Museum behind the courthouse where you can pick up the Heritage Walk brochure and map.

Formerly called Quinsee, the California town of Quincy was named after the city of Quincy, Illinois, named in turn after John Quincy Adams (1767 - 1848), the sixth president of the United States (1825 - 1829). The Quincy post office opened in 1855. James H. Bradley, one of the organizers of Plumas County, donated the land at Quincy for establishment of the county seat. He then laid out the town and named it after his ranch in Illinois.

In 1937 the Feather River Highway was completed in Feather River Canyon from Oroville to Quincy, and Plumas County towns with the Sacramento Valley. (Plumas is Spanish for 'feathers' and many places, including the county and river refer to feather or feathers from an observation in 1821 by Captain Luis Arguella that what floated on the river looked like feathers.)

The town is noted as being the home of the High Sierra Music Festival since 1998.

Museums and other points of interest Quincy contains the Plumas County Museum, which houses Maidu Indian and Gold Rush artifacts as well as many other items.