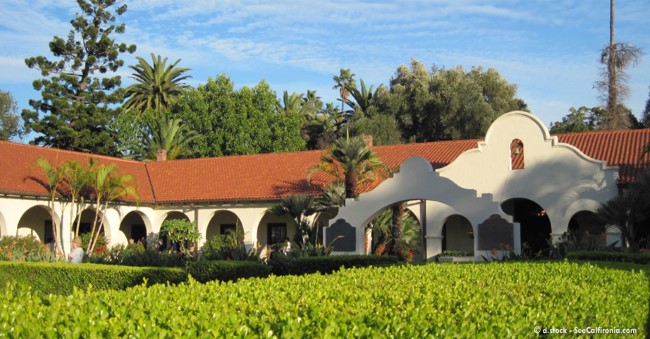 
When you visit Dominguez Rancho Adobe Museum which is open to the public in the unincorporated town of Rancho Dominguez, you gain a sense of the desirability of this location and its historical value in the growth of Los Angeles area. Among its many claims to fame is America's First International Aviation Meet held Jan. 10-20, 1910 on Dominguez Hill.

At the centennial celebration of this momentous event, history was showcased with activities to commemorate an earlier time.
Rancho Dominguez, CA--America's first International Air Meet was held 13.5 miles south of the Pueblo of Los Angeles's plaza. The significant event introduced gliders, dirigibles, balloons, monoplanes, ornithopters and more to a curious and enthusiastic audience of thousands--most of whom had never seen such things before.

The first international meet came about because Dick Ferris, an actor and promoter, approached Max Ihmsen of the Los Angeles Examiner, about promoting a major airshow. Max loved the idea and knew French flyer Louis Paulhan, bringing him in on the deal. So, just six years after the Wright Brothers first flew, the country's first international air meet was born. It included such daring pilots as Paulhan, Glenn Curtiss, Charles Willard and others.

Thousands of spectators converged at Dominguez Hill, which had a field that sloped upward to the West. Six daughters of the late Manuel Dominguez, let the aviation pioneers use their land for free. The site was near both railroad and trolley depots. Bleachers were assembled and the place took on a circus-like atmosphere, according to Ken Pauley, whose great new Arcadia book, "The 1910 Los Angeles International Air Meet," just came out and is chockfull of hundreds of fascinating photos made possible by the Dominguez Rancho Adobe Museum, Cal State Dominguez Hills and the LA Public Library.

The Highest Altitude Award went to Louis Paulhan, whose plane rose to 4,165 feet in 43 minutes, 16 1/2 seconds, setting a World Record.

Glenn Curtiss won for Shortest Start going from runway to liftoff in only 98 feet! He also won for Quickest Start-6 2/5th seconds.

Be sure and visit Dominguez Rancho Adobe Museum where an entire section is dedicated to the Rancho's aviation history.

The Dominguez family lived in the rancho home until the 1920s.