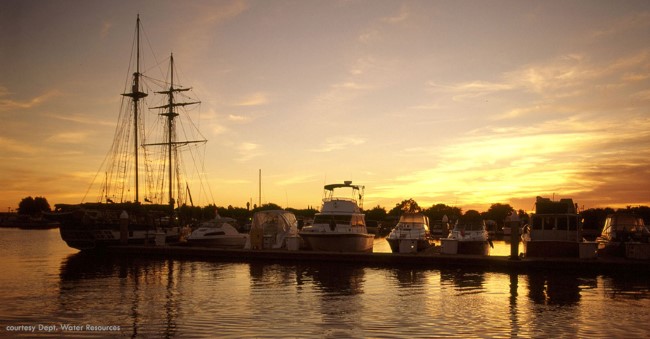 California Aqueduct Transports Water Suisun City, California - Come for the Watersports & Events, and stay for the dining and entertainment!

Wine Tasting on the Square suisunwaterfront.com

Set on the banks of the California Delta in Solano County, Suisun City takes its name from the adjacent Suisun Bay, which in turn is named for the Suisunes, a Native American tribe of the area.

Beginnings in the Gold Rush Days

860. The Schooner Champion was just one of many that picked up wheat wharf side in Suisun City. Suisun City was established in the 1850s around the time of the California Gold Rush. During that time Suisun City's was the ideal location for commerce and transportation between the foothills and the bay area. The town was a beehive of activity; wagons, carts, buggies, cattle, horses and men filled the streets. In the 1850s, the principle business in Suisun City was the sale of grain. It was the shipping point for the very productive Vaca, Suisun and Green valleys.

wrm.org Electrically powered train trip through the peaceful, picturesque Montezuma Hills over the original historic main line of the Sacramento Northern Railway. As a living history museum, the Western Railway Museum gives visitors the opportunity to ride authentic historic streetcars and interurban electric trains from all over California and the western United States.

Jepson Prairie Reserve - Spring is the ideal time to view wildflowers such as Fremont's goldfields, yarrow, yellow carpet, fringed downingia and mini mature lupine at the preserve, known for its tiny flowers that survive winter and add vibrant colors to the landscape of vernal pools and grasslands. Guests on a docent-led wildflower walk at the usually closed King-Swett Ranches likely will discover a sea of pink, purple and yellow flowers. Check for dates and times at solanolandtrust.org.

Ride the rails - Want a unique vantage point to view wildflowers? How about from the window of a vintage rail car? The Western Railway Museum at Rio Vista Junction will be running special Scenic Limited trains every Wednesday, Saturday and Sunday during April to view wildflowers, such as poppies, goldfields, brass buttons, vetch and sheep's sorrel. The Scenic Limited takes visitors 5 miles down the old Sacramento Northern Railway, south from Highway 12. During the hour-long train ride, passengers will have an opportunity to view impressive displays of native wildflowers that cover the hillsides and fields. Also running on Saturdays in April is the Vintage Comet, which will combine wildflower viewing in the beautiful late afternoon light with tasting of local wines produced by Suisun Valley Co-op wineries. Contact the Western Railway Museum - (707) 374-2978 or wrm.org - for departure times and fares for both excursions.

Grizzly Island Wildlife Area - Located about 10 miles southeast of Fairfield in the heart of the expansive Suisun Marsh, the wildlife area offers a 71/2-mile, self-guided tour along Grizzly Island Road with designated stops at several parking lots along the route. During spring, Grizzly Island has some of the highest nesting densities of waterfowl (mallard, cinnamon teal and gadwall) found anywhere in California, and nesting areas for northern harriers and short-eared owls. Shorebirds like killdeer and black-neck stilt are abundant. Visitors also will have an opportunity to view herds of tule elk and their newborn calves, and river otters. Admission is free. Information: (707) 425-3828 or dfg.ca.gov/lands/wa/region3/grizzlyisland/willifetour.html.

Suisun Marsh - This coastal wetland and inland marsh is designated a Globally Important Bird Area by the American Bird Conservancy and is home to 221 bird species and serves as the resting and feeding ground for thousands of waterfowl migrating on the Pacific Flyway. Year-round residents of the Suisun Marsh include the common yellow-throat, marsh wren, song sparrow, black rail, great egret and northern harrier. Set on the northeast edge of the Suisun Marsh is Rush Ranch, a Solano Land Trust property that conducts scheduled guided tours of the tidal marsh. On April 28, Rush Ranch will hold its 22nd annual open house. Admission is free. Information:
(707) 422-4491 or RushRanch.net.

Rescue center - The Suisun Wildlife Center in Suisun City provides sanctuary for injured wildlife that have been rescued from the surrounding area. Visit the wildlife center to learn about the ecology of the Suisun Marsh and see some of the injured wild animals that are being cared for. Admission is free. Information: Suisun Wildlife Center, (707) 429-4295 or SuisunWildlife.org.

Target shooting - Among the best sporting clays venues in the U.S. is found at Birds Landing Hunting Preserve, set among the hills and meandering sloughs of the Suisun Marsh. The preserve is set about 8 miles off Highway 12 in the rural community of Birds Landing. Test your shooting ability on up to 20 clays stations as well as 5-stand. Instructors available. Open 9 a.m. to 5 p.m., Wednesday through Sunday. Information: (707) 374-5092.