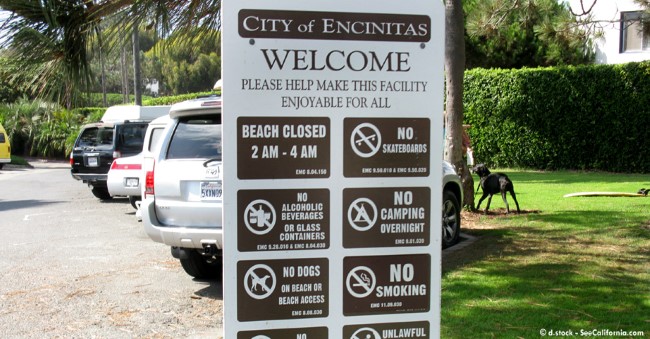 Swami's was named after a real "swami", Swami Paramahansa Yogananda. Access to one of the finest surfing beaches in California is on the right side just beyond the big gold domes of the Self-Realization Fellowship ashram, on the "101" from the north heading south. The oasis of enlightenment is open to the public, who can wander the peaceful grounds in quiet meditation, and enjoy the ocean. Built in 1937, you can't miss the building surrounded by huge white gates and columns topped with gold ornamentation.

The beach is the amazing part of Swamis for tourists wanting to see real California surf culture. Closed only 2 hours between 2 and 4 a.m., you may see pro-surfers in the moonlight taking awesome rides on their fine boards at Swamis Beach.

People passing through stop to watch, picnic on the lawns on the hilltop above the beach, or descend a set of steps to the sandy beach below that isn't particularly large. Like most of San Diego's North County, beach erosion is a problem at Swamis, where tides can nearly eliminate the dry spots where you want to sunbathe.

For real, amazing surfing and some surprises such as kids no more than 10 years old looking like pros, Swamis is a must stop on your next coastal drive in San Diego. The parking lot often is filled, but you can park further down the road and walk to this beach.

The building and umbrellas are cheerful in this outdoor/indoor beach diner with lines often out the door, large quantities of food, and service that can range from courteous to impersonal. The meals are not exceptional, but are hearty and filling, ideal for a road stop where you need to soak up the rays.

If you are looking for service, cocktails and friendly faces, plan to spend more $$. There are some really nice restaurants that offer ambiance and drinks, along with food a cut above. But then, you are going to pay three times as much.