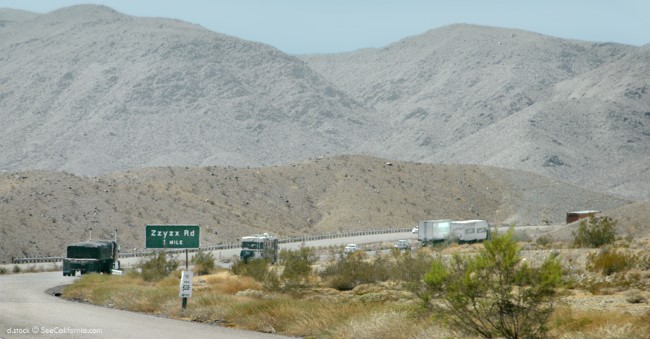 Zzyzx, California gains much fame from its name. One of the few towns and probably the only such place to include 3 "z"s and an "x" in five short letters, you can't miss the signage announcing Zzyzx as you zip along Interstate 15 Freeway where a standard issue green metal marker tells you that you are embarking on Zzyzx Road and the former site of Zzyzx Mineral Springs and Health Spa.

It is now a Desert Studies Center. Part of San Bernardino County's Mojave Desert region, millions actually pass by the exit road to Zzyzx as the make the long, monotone drive between Las Vegas and Los Angeles.

With Baker (home to the world's largest thermometer) a mere 7 miles distance and Las Vegas approx. 100 miles north & east, most people never stop or head off the beaten path to see the old highway leading to a place that once greeted tourists more than today. Curtis Howe Springer was known as promoter when he invented the name and created a tourist attraction that survived the winds of time--almost. With 30 years longevity in what some called a god-forsaken patch of land, the creative man not only came up with the Zzyzx name that he believed would become that last word in an English dictionary, but he also attracted thirsty and hungry tourists to his Zzyzx Mineral Springs and Health Spa where the water was supposed to have beneficial effects. Eventually Springer was forced out of business (around 1974) by U.S. Marshals, and the BLM moved in. Today the area contains research facilities for universities and the desert features you see in the photo. Lots of mountains, sage, dust, sun, and a desert climate that can be extremely hot & arid.