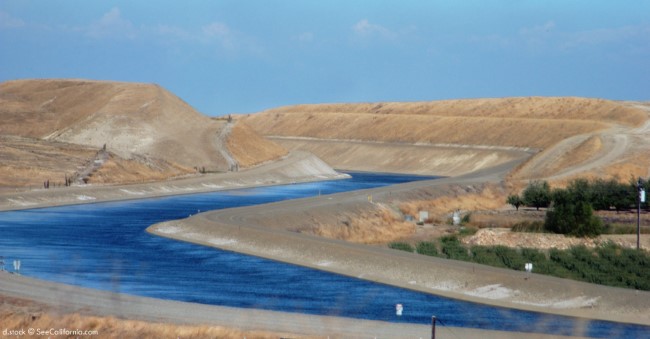 California State Water Project, created in 1960, is the nation's largest state-built water and power development and distribution system. Most municipalities buy a portion or all of their water from the The State Water Project, planned, designed, constructed and now operated and maintained by the California Department of Water Resources. The facility provides water supplies for 25 million Californians (roughly two-thirds of the state population,) and 750,000 acres of irrigated farmland. California ranks as top producer in over 20 food products and plants, but not without water often supplied by this irrigation system.

California State Water Project is a water storage and delivery system that includes:
Its main purpose is to store water and distribute it to 29 urban and agricultural water suppliers in Northern California, the San Francisco Bay Area, the San Joaquin Valley, the Central Coast, and Southern California. Of the contracted water supply, 70% goes to urban users and 30%t goes to agricultural users.

The Burns-Porter Act, formally known as the California Water Resources Development Bond Act, was placed on the November 1960 ballot. Also known as Proposition One, its chances for passage were unpredictable-- California's North-South regional rivalry was a strong factor in the election.

On November 8, the Burns-Porter Act was narrowly approved by the slim margin of 173,944 votes from about 5.8 million ballots counted. Only one northern county supported the proposition--Butte County, site of Oroville Dam. But one fact was certain, construction was soon to begin on what is now the nation's largest state-built water and power development and distribution system, which would forever change the face and future of a once virgin land.