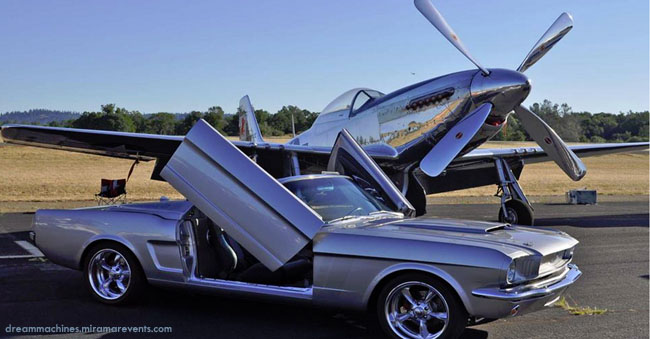 HALF MOON BAY, CALIF. --  Pacific Coast Dream Machines is a car and air show that includes both automobiles and planes. Admission (subject to change): Half Moon Bay Airport (9850 N. Cabrillo Highway) is located on Highway 1, 20 miles south of San Francisco and 5 miles north of Highway 92. For information, call 650-726-2328.

There's nothing that matches up to the Pacific Coast Dream Machines Show.  A celebration of mechanical ingenuity, power and style, the event  features 2,000 magnificent driving, flying and working machines from the 20th and 21st centuries. The world's coolest cars of every era and style, tractors and historic military aircraft are among the displays. Rides are offered in everything from helicopters and vintage bi-planes to a T-6 military trainer –– rides range from $40-$300.

Hundreds of aviation wonders are expected to be on display –– stylish homebuilts, classics from the 40's and 50's, exceptional vintage warbirds, and sport and ultralight aircraft.

The most curious and fascinating displays are the large and small engines collected and refurbished by members of the Early Days Gas Engine & Tractor Association. Their amazing array of flywheel engines are enough to power antique washing machines, lawn mowers, and an entire a Lilliputian factory. On the larger side are several pieces from Roots of Motive Power's collection of restored logging equipment like spool donkeys and Buffalo Springfield steamrollers.

Rounding out the activities will be Unicycle Drag Racing, kids' amusements, food and live music. Musical Entertainment, shiny vehicles, and fun for the kids and big kids--what more could you dream for?

We're proud to say 2016 will mark our 26th annual Dream Machines Show,” said event Chairman Chad Hooker. "This year's show promises to be as spectacular and fascinating as ever and we look forward to welcoming visitors to our beautiful Half Moon Bay area for what has grown into one of Northern California's most unique and beloved events."

The "DRIVE Magazine Dream Machine of the Year” returns with editors from Beckett Media's DRIVE Magazine on hand to select a winner from the thousands of magnificent machines on display. A special trophy will be awarded at a recognition ceremony during the show.

In 2016 a stellar lineup of all-day live music with headliners East Bay Mudd, the Chris Cain Band and the Andy Santana Band with surprise guests, plenty of fabulous food and delicious coastal-infused drink with a custom beer just for the show – Classic Motorhead Ale from Half Moon Bay Brewing Company, craft cocktails from Half Moon Bay Distillery and tasty varietals from Half Moon Bay's Barterra Winery.