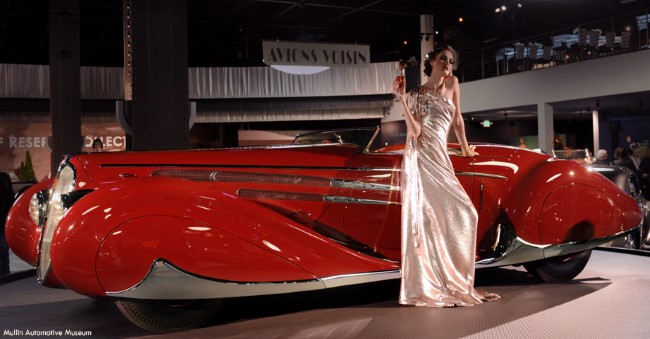 "Slowly rotating on a turntable, a wine-red 1939 Delahaye Type 165 cabriolet is all swoops and slopes and voluptuous curves, a reclining nude with a 12-cylinder engine," said a male reporter describing a vehicle in the Mullin Automotive Museum collection in Oxnard, California. A female reporter saw things differently when she picked her top 10 car museums to see in the U.S., choosing the same place because of a car on display that has spent most of its life at the bottom of a Swiss lake (shown in smaller photo).

A wrecked 1925 Bugatti Brescia Type-22 car sat for more than 70 years at the bottom of Lake Maggiore till it was dredged in 2009. The unrestored "piece of art" was acquired by the car museum at Bonhams in Paris in January 2010 for the mere price of $368,320.

Owner of one of California's newest, must-see car museums, Peter Mullin, has loved cars all his life and has a fondness for French marque cars and Italian designers, as you'll discover when visiting one of two excellent car museums in Oxnard (the other is Murphy Automotive Museum.) When Mullin paid the most ever for a single car, spending $30 million on a 1936 Bugatti Type 57SC, he described it as the Mona Lisa of automobiles!

The executive who sold his successful insurance company to Prudential Financial Inc. for an undisclosed price, has time now to focus on his passion for cars. In February 2012 he shipped 10 of his favorite cars from the Oxnard museum to Paris for a spectacular collector car show, Retromobile.

He said he wanted to honor the country from which his prized possessions originate. French cars of the late 1920s and 30s were "the absolute apex,” says Mullin, owner of more than 65 such classic beauties that combine engineering, performance and sculptural beauty. Nothing comes close, he says.

Hours, location and admission: mullinautomotivemuseum.com California has around a dozen automotive museums, making it the best place in the U.S. to see car collections! Consistently ranking as one of the 10 Must See Car Museums in America is Petersen Automotive Museum in L.A. Others you shouldn't miss include Nethercutt in Sylmar, Marconi in Tustin, and Blackhawk in Danville.