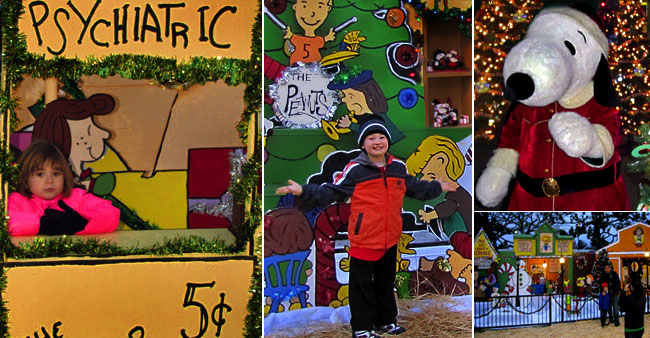 (Note: Here's where we post the annual info about this attraction)

COSTA MESA, CA--Costa Mesa Mayor Will Jordan once told his young son Jim that he would be part of City Hall someday. Now, approx. 50 years later, Jim's amazing Peanuts-inspired character displays are in front of City Hall (77 Fair Drive) and open without charge nightly from 5 to 9pm through Christmas Day.

Jim began his impressive creations in 1967."Peanuts was a rage. Everyone loved Charley Brown, Snoopy and friends. They were featured in the paper, on TV specials and even NASA used them," he said. "My wife, Linda, and I were captivated by the characters and began making them out of wood to place in front of our east Costa Mesa home for the holidays."

The neighbors loved it and one thing led to another. "We kept adding to the display and the first automated figures were flying wooden birds," said the friendly man, whose day job was at Jordan Auto Supply. Word spread and pretty soon hundreds, then thousands of onlookers made their trek to the Jordan home to see what was new.

Friends joined in the act to help create and set up the expanding number of displays, including one with a model train rolling on tracks. In 1980, Robin Hardison brought his mechanical skills to the elf team, utilizing his knowledge of metal and mobility to enhance the creations, which grew in sophistication, size and mobility. One magnificently features barn doors opening and closing, with different scenes appearing, which show the holiday spirit.

The Snoopy House, just like Charles Schulz's Peanuts, took on a life of its own as people from around the globe heard about it from friends or in the media and made their holiday plans to visit Costa Mesa to see this Christmas institution. Eventually the crowds grew to more than 80,000 joyful spectators each holiday season.

In 2011, when the property hosting the Snoopy House was foreclosed, the city leaped at the opportunity to become the legendary holiday display's permanent home. It was fitting that this year, Jim and Linda Jordan and Robin Hardison were honored by the city. On hand to assist in this ceremony were none other than Snoopy, who made his way over from Knott's Berry Farm's Camp Snoopy, and Charles Schulz' daughter, Jill.

"I can't thank Jim Jordan and his elves enough for what they have done," Jill said. "They've really kept my father's spirit alive. My dad would appreciate their wonderful work in really capturing the innocence of youth for everyone of all ages."

In addition to the Peanuts-inspired displays, the exhibit features nightly visits from Santa Claus, carolers and other entertainment, and a spectacular holiday light show projected on the facade of City Hall that culminates with falling snow. It's a fantastic place to bring your family of all ages to join in the fun, take photos and have a good old-fashioned blast.

You might run into Jim and Linda Jordan, Robin Hardison and many of the other volunteer elves, such as Robert and Vienna Ashley, who helped and are continuing to help make this festive display possible. One elf told me they are working on a Hook and Ladder Fire Truck that will have an elf hanging from a ladder, possibly placing a star atop a tree for next year's celebration. Thanks to all of them for their imagination, hard work and spirit.

Kudos also to the City of Costa Mesa for stepping in to make sure the incredible, adorable Snoopy House, has a "house" forever to provide fun and be enjoyed generation after generation.