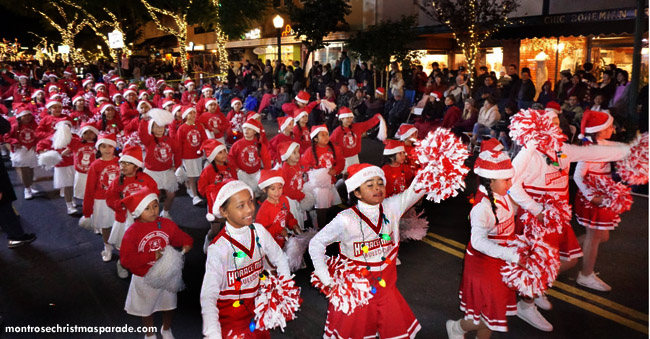 Held the first Saturday in December. 45th annual parade in 2022

Route: Staging at La Crescenta Ave & Honolulu Ave; Begins at Honolulu Ave & Rosemont Ave and runs east to Verdugo Rd. The center of the parade and the entire Montrose area is the intersection of Honolulu Ave & Ocean View Blvd.

Parking is available in the open city parking lots, on the open side streets and within the surrounding neighborhoods.

One of the coolest treats on a warm pre-Christmas night in Glendale is the Glendale Police Department helicopter fly over of Santa Claus. The tradition began in December 1969.

For an event that delights the entire community and guests from far and wide, this is an event not to be missed. Once you attend, the experience will surely have you wishing to come back and experience Glendale - Montrose Christmas Parade charms.

In the early 1950s MGM musical star, Dennis Morgan, created an afternoon holiday parade which marched down Honolulu Ave. in broad daylight. With Grand Marshals such as Jackie Cooper, Jack Carson, and Morgan's other movie star friends, the parade was a hit! Morgan's birthday was December 20, just days before Christmas. The parade was resurrected in 1976 by merchant Frank Roberts, who has since passed, but is remembered through this great event dedicated in his memory.

Other entertainment throughout the year include free summer concerts in Glendale, quite a few Easter celebrations, and Halloween.