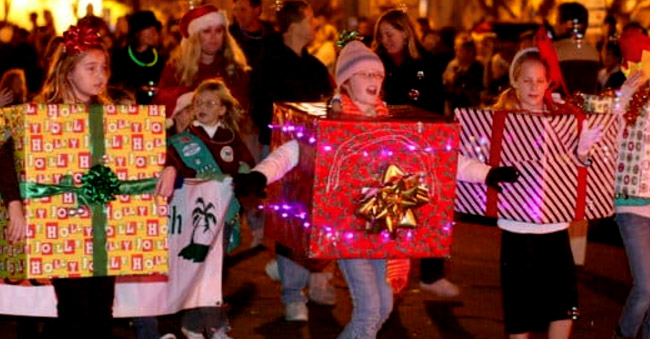 Route: begins at Sunset Cliffs & Newport, proceeds on Newport to Abbott where it turns, then makes another turn at Santa Monica where it ends at the stoplight before Bacon.

42nd Annual OB Holiday Parade is Surfers Paradise of fun. Before the parade a Christmas tree is placed in the sand. The parade is hosted by the Ocean Beach Town Council Tree Committee. Every year, Newport Ave. is taken over by the geriatric surf team, motorcycle riding dogs and marching bands - plus Santa Claus on a fire truck!

Come early to get a spot, there is parking throughout the neighborhood. Parade start time is 5:05 p.m.

The quaint little surfing village of Ocean Beach hosts one of the best Holiday Parades in SoCal. Newport Avenue is lined with colorful OBceans and visitors, all eagerly awaiting the commencement of the Annual OB Holiday Parade at 5:05 pm.

For some, it's the excitement of seeing the Point Loma Marching Band strut their way down the street, or the SD Roller Derby Dolls in their eye-catching costumes. For others, it's watching the VW Beetle Club and Classic Woodies roll down Newport Ave.

Santa Claus makes his appearance, too! After the festivities, the nightlife of OB takes off as locals and visitors celebrate and spread Holiday Cheer at the many unique local bars, breweries and eateries! Costumes, cheering and laughter are not only welcomed, they are encouraged! Come see for yourself what the locals have known for nearly 40 years...Santa would rather be in OB!

Other exciting events include the Tree Lighting Ceremony in Ocean Beach.