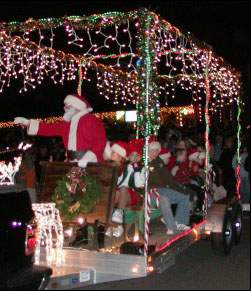 Parade route: Begins at Arch on Joaquin Gully Road to Fuller, then circle back to Meadow Lane. Parking is available at Twain Harte School.

The streets of Twain Harte are filled with carolers, Santa Claus and holiday cheer this Friday night at the Twain Harte Winter Wonderland Parade. The annual Christmas Carol Sing-a-Long will begin under the arch at 5:30 pm, the town tree is lit and the parade starts at 6 pm with Santa's arrival concluding the parade.

Residents and visitors can come out early. Parking is available at Twain Harte School. Santa will stay long enough to visit with all children in town and have free pictures by a professional photographer taken with them.

Everybody loves snow in Twain Harte, but they love a parade more, especially when it's the annual

Christmas Parade that was cancelled in 2010 due to snow. In 2011 the parade was "go" as the streets of Twain Harte Christmas Parade returned for another year. The community was excited.

Festive holiday music, floats and Santa Claus delight all ages. Bundle up and enjoy an old fashioned Christmas with the parade, a tree lighting ceremony the same evening and Santa visits for the kids. Santa makes his grand appearance in the parade as the head honcho.