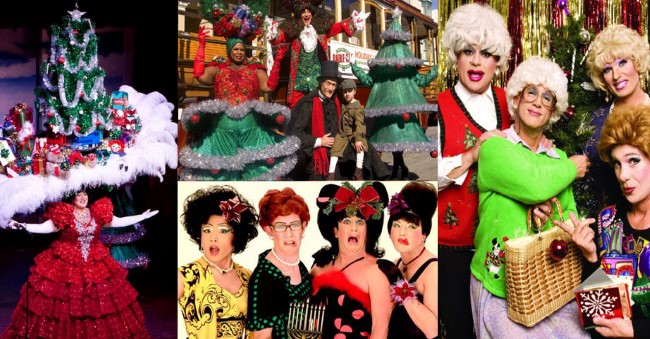 Take 4 talented drag performers, cast them in two Xmas episodes of the uproarious TV show: THE GOLDEN GIRLS, and you have the perfect holiday event for the entire family. The holidays are on their way and the Girls are back!

This yearly San Francisco tradition, offers a loving drag tribute to the characters the entire world has come to know and love in select Christmas episodes often spun and twisted to reflect the cast and its acting strengths. If playing the Golden Girls in drag weren't enough to entertain, the personas of these local drag stars draws the crowds to often "sold out" performances.

Originally airing on NBC from September 14, 1985, to May 9, 1992, The Golden Girls was shot on videotape in front of a live studio audience. Created by Susan Harris,  actresses Bea Arthur, Betty White, Rue McClanahan, and Estelle Getty portrayed four  women who share a home in Miami, Florida. Comedy mixed with drama surrounding issues of senior women, their love lives, careers and interactions, each episode generally ended with a feel-good conclusion in which conflicts were resolved. Never shying away from controversial issues, episodes include topics such as coming out and same-sex marriage, elder care and homelessness, HIV/AIDS and discrimination against people with HIV/AIDS, US immigration policy, death and assisted suicide. There were 180 half-hour episodes spanning seven seasons.