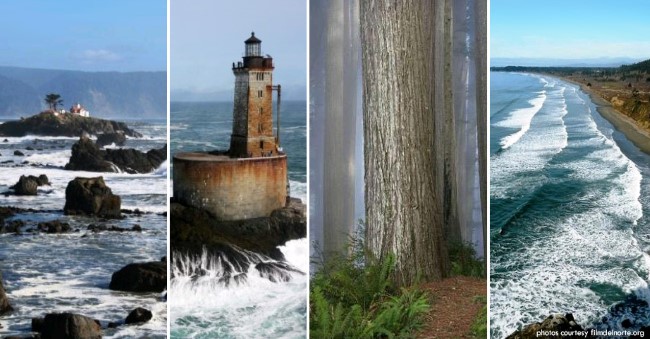 Look for the place where towering redwoods meet the sea. Somewhere between the crashing surf and complete silence of the giant forests you'll grapple with words to describe Northern California's coastal beauty. Del Norte County's complex and compelling treasures to soak up like the generous rainfalls that average nearly 50 inches per year, are beyond any coastal experience you'll find on Earth.

Locals don't brag so much about their surroundings because words fall short of the magnificence that pictures only partially capture. Stand among trees dating back several thousand years and listen to what they have to say. To the untrained ear, it sounds like nothingness--no cars, no jets, no noise.

Among the forests is the world's tallest tree, the Hyperion, which stands at 379.3 feet. It is nestled in Redwood National and State Park that straddles two counties--Del Norte & Humboldt.

Where to stay: Crescent City! Forbes declared the beach destination one of the 20 prettiest towns in the U.S. It is the only incorporated city in the entire county bordering the state of Oregon. There's B Street Pier you can walk on and enjoy free pier fishing, locally sourced produce plus lots of fish on the menu at restaurants, a harbor filled with fishing boats, spectacular sunsets, two lighthouses, and the crashing surf along pristine beaches strewn with seashells and driftwood.