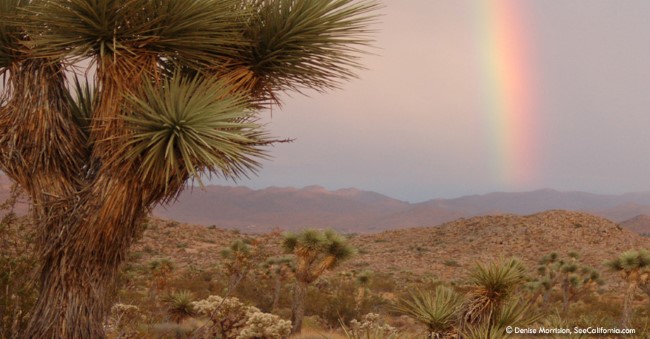 Those who live in the California deserts know their deserts and can tell you what's unique about them. Visitors, however, may have a harder time figuring out the difference between the Mojave, Sonoran and Colardo Deserts. The easiest way to distinguish each is by the lands it holds and cities and towns within its bounds.

Small areas in southeastern California are located in the low desert, or California Sonoran Desert.

Part of this expansive Sonoran Desert in California is called Colorado Desert. The Colorado Desert region encompasses approximately 7 million acres, reaching from the Mexican border in the south to the higher-elevation Mojave Desert in the north and from the Colorado River in the east to the Peninsular mountain range in the west.

Colorado Desert in the lower elevations (below 1,000 feet) with the lowest point of the desert floor at 275 feet below sea level in the Salton Trough. Although the highest peaks of the Peninsular Range reach elevations of nearly 10,000 feet, most of the region's mountains do not exceed 3,000 feet. These ranges block moist coastal air and rains, producing an arid climate. The Colorado Desert's climate distinguishes it from other deserts. The region experiences greater summer daytime temperatures than higher-elevation deserts and almost never experiences frost. In addition, the Colorado Desert, especially toward the southern portion of the region, experiences two rainy seasons per year, in the winter and late summer, while the more northerly Mojave Desert has only winter rains.

Creosote bush scrub, yucca, cholla cactus and desert dunes fill the lowlands, while higher elevations are dominated by pinyon pine and California juniper, with areas of manzanita and Coulter pine.

Joshua Tree National Park spans the transition from the Mojave to the Colorado Desert, with slightly less than half the park, about 340,000 acres, in the Colorado Desert. Anza Borrego Desert State Park encompasses over 600,000 acres, or nearly 9 percent of the region, and the Santa Rosa Wildlife Area, which includes Fish and Game, State Lands Commission, and BLM lands, encompasses about 100,000 acres. Joshua Tree National Park, Anza Borrego Desert State Park, and the Santa Rosa Wildlife Area are part of the Mojave and Colorado Deserts Biosphere Reserve.

Algodones Dunes Stretching 40-plus miles northward from the U.S.–Mexico border, and ranging from 6 to 10 miles across, the Algodones Dunes are the United States' largest dune system. One hundred sixty plant and animal species inhabit the Algodones Dunes, many of which are rare or endemic. Sensitive wildlife include the flat-tailed horned lizard, Colorado Desert fringe-toed lizard, and Couch's spadefoot toad (all three of which are Fish and Game species of concern), and at least four endemic beetle species, including the Andrews' dune scarab beetle. Plants that are found only in active dune habitats include Algodones dunes sunflower, Wiggins' croton, giant Spanish needle, sand food, desert eriogonum, and Peirson's milkvetch, which is federally listed as threatened and occurs only in a band of habitat across the central portion of the Algodones dunes. The North Algodones Dune Wilderness Area (approximately 30,000 acres) is off-limits to off-road vehicles.