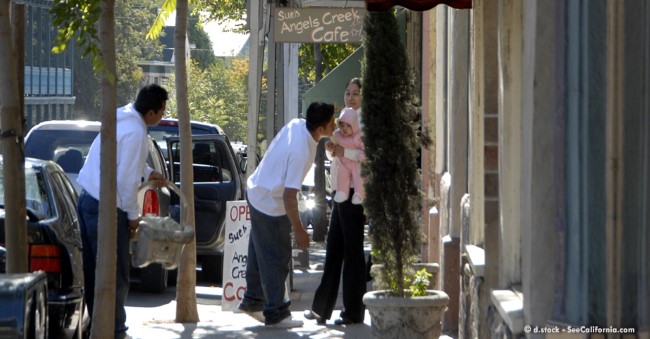 Angels Camp in California's Gold Country where gold was discovered and actively mined as the primary industry for several years during the mid-19th century, enjoys a modern lifestyle set to the backdrop of historic buildings, museums to commemorate the area's rich history, and one of the nation's most spectacular forests nearby in Calaveras County.

Small cafes and restaurants are popular places to go and socialize with friends or enjoy an outing in the old downtown Angels Camp. There are shopping centers that are new and modern with Starbucks and other such amenities, but the locally run businesses such as restaurants and shops make this region a unique and interesting place to stop.

During your visit, be sure to stop in downtown Angels Camp and look at the "Jumping Frog" plaques inlaid in the pavement to commemorate winners of the annual event, the Calaveras Jumping Frog Jubilee. There is also a larger than life sculptured frog mounted on a monument post to look and photograph.

The history & lore about the Jumping Frog stems from Mark Twain (Samuel Clemens was his real name), a well known American author who lived from 1835 to 1910. He moved to San Francisco in 1864 and met success as a writer with his hilarious fictional short story, "The Celebrated Jumping Frog of Calaveras County".

The story is told by a narrator who is repeating a story he heard from a bartender, Simon Wheeler, at the Angels Hotel in Angels Camp. A guy named Jim Smiley bets on anything --including a frog he caught and named Dan'l Webster. He trained the frog to jump high and by the end of three months the frog jumped higher than any other. A bet ensues with a stranger who tells Jim if he had a frog, he'd bet him $40 that the frog he had could beat Jim's.

Agreeing to the bet, Jim asks the stranger to hold his trained frog while Jim catches another frog. The sneaky stranger pours lead shot into the frogs mouth. When the frogs were lined up to jump, Dan'l Webster didn't budge, surprising his owner. Disgusted, he gave the money to the stranger, who walked away, happy. Wondering why Dan'l looked plump, he turned the bloated frog upside down and it coughed out handfuls of shot. Jim set the frog down, and chased after the stranger. But the stranger was long gone, and Jim never caught up to him.

At this point in the story, bartender Wheeler is called away but returns and starts telling another story of Jim's cow with one eye. The narrator excuses himself and leaves.

The story has made for many years of celebrating with real jumping frog contests, look-alike Mark Twain characters, and hundreds of thousands of tourists each spring at Calaveras County Fair & Jumping Frog Jubilee. The event is held annually the 3rd weekend in May. It features exhibits, entertainment, a rodeo, livestock exhibits and the best little carnival in the west. Everyone is your neighbor and you are hosted by the friendliest people on earth.