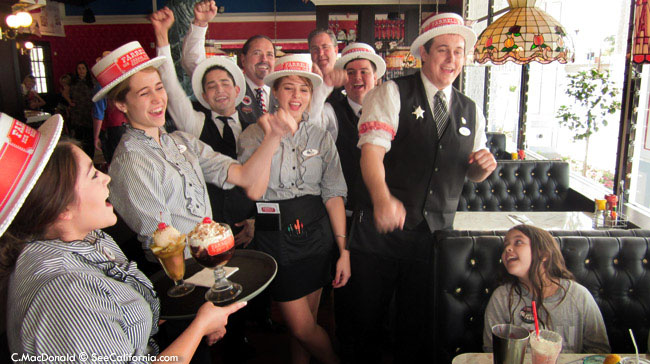 Buena Park, California is known for its many spectacular attractions. Adding to its impressive list, just one block from Knott's Berry Farm, is the first Farrell's Ice Cream Parlour Restaurant in town. In fact, going there is so much joy, that if you look up "Fun" in the dictionary, you just might find a picture of Farrell's.

Farrell's is a Fun Zone for many reasons. Perhaps it's the ragtime player piano music you hear while approaching the front door. Maybe it's the feeling of excitement you get as you enter and a Farrell's Zoo (which the Food Network called one of its top "Most Decadent Desserts") whizzes by you in the sturdy hands of two servers.

Your spirit is lifted just by entering. There are smiling, straw hat-wearing, gleeful cast members (like Jake) racing about to exceed customer expectations; a huge wall screen shows changing images of happy guests (going back to the 1960s) that were sent in by some of the more than 280,000 Facebook members; vibrant colors (red, white and Americana) further liven the room, and there's the hilarious Farrell's Sundae News Menu, which even has jokes (What's Irish and stays out all night? Patty O'Furniture).

The seventh Farrell's in California is much more than its famous Belly Busters Ice Cream Extravaganza (Gibson Girl, Mt. Saint Helens, The Pig's Trough and Hot Fudge Volcano). It's a world class eatery. Where else can you order a Gastronomicaldelicatessenepicurean Delight, Portabella Veggieburger, Chopped Cobb Salad, Pizza-Pie-Tizers, Old Fashioned Onion Mountain and All American burger?

They've thought of everything, even a Fit Farrell's Menu, which includes a sundae (vanilla ice cream on top of a bed of blueberry compote, topped off with fresh strawberries—under 250 calories!).

These guys and gals have a real "cents" of humor. There's a Fake Chicken Dinner that looks like real mashed potatoes, peas and carrots (but's really made of candy). What won't they think of next? Now get this, they even offer Beer Shakes and Floats! (Also seasonal beers and wines.) Anyone who uses words like splendiferous, cock-a-doodle, happy-it is and Funatics Faves, gets my vote. Farrell's even gives you a free sundae on your birthday (show ID).

In 1963, this "Fun Concept" was created by Bob Farrell, who had worked in restaurants at Disneyland. "Bob wanted to take his wife to a nice ice cream store in Portland, Oregon but he couldn't find any, so he opened his own," explained Michael Fleming, CEO of Lake Forest-based Parlour Enterprises, Inc., which owns Farrell's. "Bob's 86 and still a fantastic mentor, shareholder and advisor, who has helped us keep the same quality, recipes and look that made the chain so memorable." 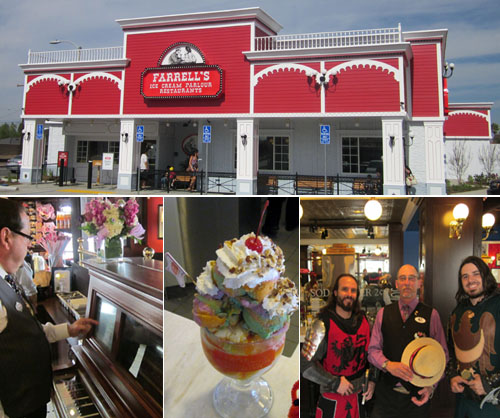 "Farrell's is about memories. We want our guests to leave with lifetime memories. We transport people back to their fun days as youths and they love to come back."

Michael said he used to go to Farrell's when he was in high school in the San Fernando Valley. "I just loved the place and when I worked at Broadway, I'd meet friends at the Farrell's in Woodland Hills and we'd have such a good time, often staying until closing."

Paul Kramer, President of Parlour Enterprises, Inc., who loves the Hot Fudge Nutty Nutty, said, "We're a restaurant first but also known for the entertainment provided by happy, enthusiastic, competent cast members. We had more than 800 applicants for Buena Park and hired 150. The first thing we looked for was a natural smile."

Jeremy Law, a Farrell's spokesperson, showed off an exciting Party Room, which can hold 60 or so people for birthday parties, baseball teams and other gatherings as well as celebrations. One guest there told me, "A better time is hard to find!"

Erich Heikeman, General Manager in Buena Park, said our mission is to "Deliver happy-itis to every guest, every day." If you want to catch a case of "happy-it is," drop into Farrells