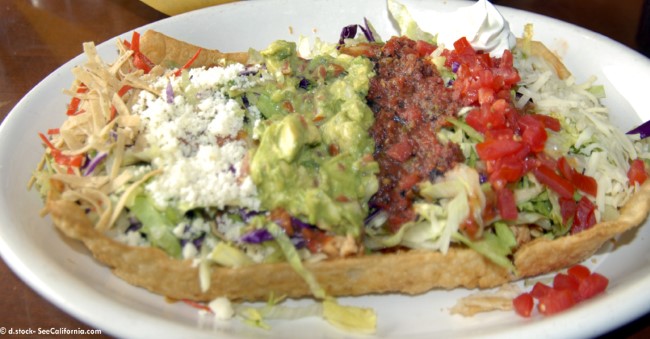 Shown in the photos is an El Torito Tostada Grande with lots of guacamole and generous salsa toppings. El Torito salsa uses diced onion and diced tomato, giving it a fresh, slightly sweet flavor that is enhanced when combined with the fresh tortilla chips.

Larry Cano is a name you may not know or recognize, but the nation has him to thank for creating a style of Mexican restaurant dining that has been a mainstay, especially in California, since 1954 when El Torito first opened. He'd left the Air Force and was filled with energy and desire to start a restaurant.

Cano was a law student before entering the Air Force to become a fighter pilot, and had little to no experience in restaurant operations.  At the age of 30 he arrived in Van Nuys, Calif. with the Air National Guard. He loved food and had several tricks under his sleeve--a handful of recipes and ability to make tequila cocktail beverages. Purchasing a defunct Polynesian restaurant on Ventura Boulevard in Encino gave the fighter pilot his first taste of the business and he liked it.  His Mexican-American roots and very short stint washing dishes in a restaurant in East L.A. provided the ingredients American taste buds longed for--something slightly spicy, and slightly exotic--but not too much. He transformed the restaurant he purchased into a small place called El Torito. One of his contributions among many was the Margarita cocktail he made--blended with fresh-tasting ingredients, including quality tequila.

El Torito's margaritas wins awards for its taste, utilizing Puerto Vallarta tequila. When Larry Cano founded El Torito the margarita was an obscure cocktail, but its popularity grew through the quality recipes severed at the chain throughout the years. You can count on a tasty house margarita and if you receive anything less, something is truly amiss!

El Torito grew in popularity and Cano expanded his reach, growing one restaurant into over 200 at one point. Cano also opened other ventures such an elegant restaurant overlooking Newport Harbor that was called Cano's. The Gazpacho was heavenly, as were many of the quality recipes that allowed the entrepreneur to expand his repertoire.

While Cano has made fortunes (he sold El Torito and took shares of stock in the acquisition) his Cano's and Salud! ventures eventually were closed in Chapter 7 bankruptcy filings.  The concepts of the restaurants had great promise and the menus were great. In the case of Cano, the property in which it sat was very pricy, making it a challenge for any restaurant to operate at profit.

El Torito has mostly been headquartered in Orange County since 1976, when W.R. Grace Corp. acquired the chain. At one time it was a sister company of California Pizza Kitchen, and at another time the chain grew to over 225 restaurants throughout the world (during the 1980's).  El Torito and El Torito Grill, previously owned by Prandium Corp., were acquired by Real Mex in 2000. It is now almost completely California-based with around 65 restaurants (give or take a couple).

Those who eat Mexican food at El Torito can gain insight into why the tastes of the meals and cocktails are so similar at El Torito, El Torito Grill, Chevy's, Acapulco, Las Brisas and El Paso Cantina.  Master Chef Pepe Lopez is in charge of the menus at the corporation's restaurant holdings that also include Who Song & Larry's, and Casa Gallardo, Sinigual, and Real Mex. Like any restaurant chain, management is key to success, and with El Torito, there are some shining star units among the crowd, and their locations & view next to the Pacific Ocean certainly keeps the people coming!

Real Mex Restaurants,  the largest full service, casual dining Mexican restaurant company in the United States with nearly 200 restaurants operating in more than a dozen states with sales in excess of half a billion dollars, is the parent company of El Torito.  Its corporate office moved in 2005-2006 from Long Beach to Cypress.

El Torito's made-from-scratch tableside guacamole that is prepared according to the guests' specifications, its sizzling fajitas, hand-made tamales, enchiladas, tacos, traditional Mexican combination platters,  and wide selection of margaritas could be considered trademarks because of their tastes and presentations.

El Torito uses locally grown, fresh ingredients with an emphasis on high-quality meats and fresh vegetables, prepared in a traditional Mexican style.  "Chef's Specials", which are regional Mexican appetizers, entrees and desserts that are prepared according to recipes collected by executive chef Pepe Lopez during his frequent visits to Mexico are generously shared. You'll find many of them through Internet search by entering his name.  The atmosphere at El Torito resembles a traditional Mexican hacienda that is welcoming, fun and festive, and you seldom leave hungry or wanting for anything else.