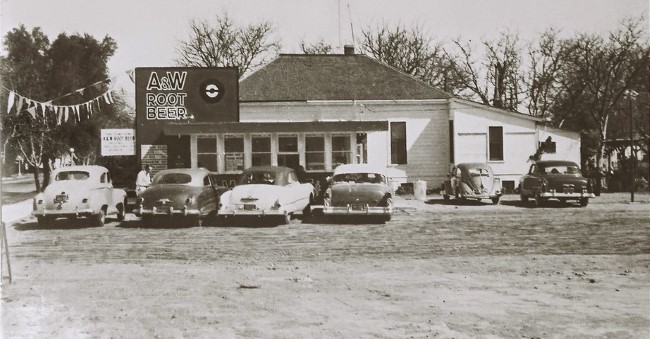 LODI, CALIF.—Most tour buses arriving in Lodi head straight for the wine. Wine tasting, wine tours, and the Lodi Visitors Center where wine is sold are the popular stops. When the nostalgia crowd arrives in town, they are looking for another popular beverage—A&W Root Beer. Lodi is the birthplace of the brew, the world record setter for the largest root beer float, the home of the  Cruise Night on Thursdays during the summer, and the place that will celebrated the 100th birthday of A&W Root Beer in 2019.

History: On June 20, 1919, while the citizens of Lodi held a parade honoring returning World War I veterans, a young entrepreneur named Roy Allen set up a roadside drink stand to cure the thirst of the spectators. His new thick and creamy drink concoction, root beer, was an instant success at a nickel per glass mug.

At the time, Allen was known throughout the southwestern for buying, renovating, and selling older hotels and motels. During his travels he sampled a recipe a pharmacist at a soda fountain gave him while he arranged a hotel deal in Tucson. He liked it and bought ownership rights to the recipe, using it for the launch of a hamburger and root beer stand in Lodi in June 1919.

The Volstead Act of 1919 had prohibited the sale and consumption of alcoholic beverages, so the clever businessman decorated his new establishment to look like an old saloon, complete with bar and barstools. With soldiers returning from France after WWI,  suddenly faced with no available liquor, they began sampling  Allen's root beer, then spreading the word about his stand. By the summer of 1920 Allen knew the root beer craze was hot, so he opened a second root beer stand in a nearby city.

The responsibilities of running and growing this type of business were a bit different than selling hotels, so he formed a partnership with one employee,  Frank Wright, to open five more root beer restaurants in the Sacramento area. A&W Root Beer combined the initials of the two partners' last names, Allen & Wright. While Wright eventually sold back his portion of interest to his partner, the name was trademarked and Allen continued to grow earnings through many business dealings. He sold franchise rights in five Western states (including California where he launched the first stand) and went national with capital raised. Credited with creating the first restaurant chain in America, the national brand "A&W Root Beer" was launched with stands that offered drive up, car-hop service. By 1950, Allen had grown the A&W stands to 450 outlets, then sold off the entire operation, thus paving the way for its incorporation and growth.  His wife was ill, he'd run the business successfully for close to 30 years, and he was satisfied with where he'd taken it during his ownership.

A&W Root Beer has been passed through a succession of owners loosely as follows:

1950 - 1963   Nebraskan, Gene Hurtz owned the company  immediately incorporated his holdings as the A&W Root Beer Company in 1950. He gave franchisees discretion in serving food and developing outlets as drive-in restaurants. By the end of the decade, there were more than 1,900 A&W restaurants throughout the United States, and the first outlet outside the country had opened in Canada.

1993 - Cadbury Schweppes PLC of London, England bought the company, including all of its assets and operations, for $334 million.

1994 - A&W Restaurants, Inc. was purchased by Sagittarius Acquisitions. The president of Sagittarius, Sidney Feltenstein, sought to revitalize the company's operations in the United States. Despite the separation of the beverage business from the restaurant chain, it is the tradition and legacy of the root beer beverage that most people are attracted to, and what people continue to drink through the myriad changes in ownership of the brand-name product.