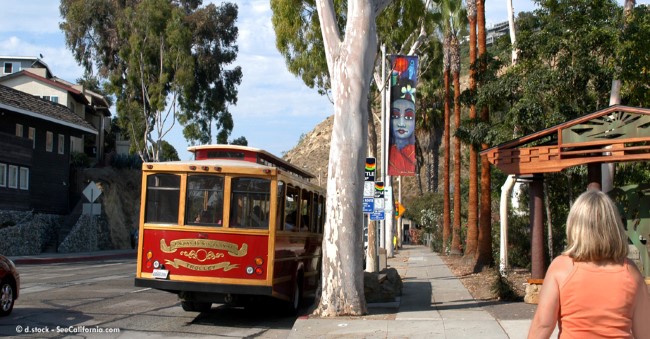 Wanna' take a ride? Tourists often feel intimidated by the public transportation systems so popular in the cities they visit in California. It's not fun being a stranger in a strange land, and getting kicked off the bus for not having the correct change to pay the fare, or holding up commuters because you don't know how to secure your rental bicycle to the front of the bus. The nightmare scenarios of messing up are endless!

Riding a bus, trolley, tram or other such public transportation is sometimes your best solution, and some cities have created programs for tourists with free rides.

Among the cities that have such programs are Laguna Beach, where parking is at a premium. The city, hotels, boutiques and beaches stretch for several miles along Pacific Coast Highway, where summer parking is a challenge (and that's putting it mildly.) The free trolley runs in the summer months and is an adjunct to the fee-based bus service operated by the city.