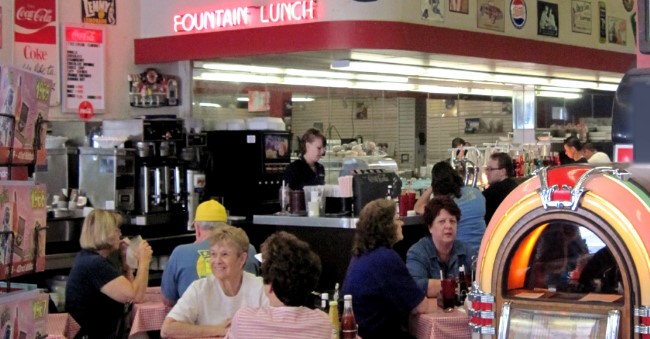 Orange, Calif. - There's still a place that can take you back to the 1890's in Southern California. When watching a Twilight Zone episode about a man who sought such a place where people were friendly and said hello to neighbors, he discovered it in Willoughby, though it killed him getting there.

You don't have to die for a hand-made ice cream soda, a red leatherette booth, $3 tip and pharmacy prescriptions delivered to your nearby home.

Watson Drugs and Soda Fountain on the edge of the Orange Circle, a European style roundabout  road in the center of Orange Old Towne Square, is just such a place. The spirits of its founding fathers remain in this little piece of heaven a few miles off the 22 Freeway in Orange County, California.

There's actually a renewed interest in people connecting with the past as they discover that chain restaurants and cookie cutter smiles don't quite cut the mustard. Places such as Johnny Rockets, a chain restaurant that many consider over-priced and corny (food servers must draw happy face ketchup on your plate of fries,) miss the mark, created out of a marketing 101 book, say those seeking to preserve the few remaining businesses with a century of history. There's no denying the chain restaurant has become America's hugely successful business model, replacing  smaller mom & pop shops. However, there's still something unique and special about authentic diners dating back to the 1800's. So few remain in Southern California-- they are worth supporting and promoting.

Watson Drugs and Soda Fountain was born out of an era in which pharmacies served up potions of elixirs that made people feel good, thanks to injections of ingredients such as cocaine.  When prohibition set in, the soda fountain at the local drug store could not serve its carbonated water on Sundays, thus the Ice Cream Sundae came about.

The prices at Watson Drugs & Soda Fountain have risen to keep up with the competition and try to survive. But the connection with the past remains one of the driving forces in Old Towne Orange, home to beautifully restored late 19th and early 20th century houses in the largest National Historic Register district in California, and to a unique and authentic business that captures the essence of Americana.